The Harlem Hellfighters will finally receive national recognition after their contributions have gone ignored.

The Harlem Hellfighters, the first African-American unit to fight in World War I, will finally receive some national recognition in this country after their contributions have largely been ignored for more than 100 years.

As previously reported by theGrio, the 369th Infantry Regiment overcame unimaginable discrimination and neglect to earn their infamous nickname and become one of the most decorated units of the war. But before they got to fight “over there,” the men of the 369th had to fight every day over here.

Now, more than 100 years after the unit helped the U.S. win World War I, it has been honored with a Congressional Gold Medal, CNN reports.

Last week, President Joe Biden signed The Harlem Hellfighters Congressional Gold Medal Act into law, which will posthumously honor the unit. NBC reports that families of members of the 369th Infantry Regiment will receive replicas of the prestigious medal.

“It is never too late to do the right thing,” Democratic Rep. Tom Suozzi of New York, who sponsored the bill, said in a statement. “Awarding the Harlem Hellfighters the Congressional Gold Medal ensures that generations of Americans will now fully comprehend the selfless service, sacrifices and heroism displayed by these men in spite of the pervasive racism and segregation of the times.”

“The Harlem Hellfighters risked life and limb in defense of an America that discriminated against them,” said a sponsor of the bill, Ohio Rep. Joyce Beatty, chair of the Congressional Black Caucus.

“Yet the Hellfighters helped liberate Western Europe and secure victory for the Allied Forces,” she continued. “More than 100 years after these brave men fought so valiantly, I am proud to see my congressional colleagues and President Biden honoring them for their exemplary service on behalf of a very grateful nation.”

The 369th fought so hard and with such tenacity that they were dubbed “The Harlem Hellfighters” by the German troops they faced. The 369th became the first American unit to be cited with the French Croix de Guerre. Members of the regiment were awarded one medal of honor and many Distinguished Service Crosses.

While white units leaving New York for Europe embarked upon their ships with great fanfare and marching bands, this was not the case for The Harlem Hellfighters, an issue that plagued the soldiers during their entire tour.  The 369th, in fact, had to train with second-hand uniforms and broomsticks as rifles. 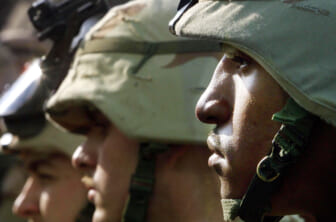 Author Max Brooks, who collaborated with artist Canaan White to create the graphic novel The Harlem Hellfighters, told theGrio in 2014 that what makes WWI significant in the Black man’s struggle for recognition is that the war was fought under the banner of freedom and democracy when there was no outward attempt to offer the same rights to Blacks in the armed forces.

Before the 369th was formed, any Black man who wanted to actually fight in “The Great War” had to enlist in Canadian or French units. Blacks in America’s military had previously been detailed to service units, behind the lines or stateside.

Once WWI started, many African Americans believed their valor would be rewarded with a push to turn the tide of discrimination against Blacks in the United States.

Brooks, author of the popular World War Z and The Zombie Survival Guide, previously told CNN the Hellfighters were “set up to fail by their own government” and did not receive “the kind of valor, the kind of honor that they deserve.”