As ABC’s The View prepares to return for its first season after co-host Meghan McCain‘s departure, the popular daytime talk show plans to fill the vacant seat with a rotation of weekly guest hosts.

With the show set to premiere its 25th season, several women are slated to serve as guest hosts, including three Black women, according to Deadline.

The seat once occupied by McCain has been traditionally reserved for women with a conservative viewpoint. Preceding McCain, the daughter of the late Sen. John McCain of Arizona, were TV hosts Jedediah Bila and Elisabeth Hasselback.

Love, a Republican who represented Utah for two terms in Washington, D.C., will begin her guest run on Tuesday when the show returns to its live studio. She will join Whoopi Goldberg, Joy Behar, Sunny Hostin and Sara Haines at the table. It will be the first time The View will have a live audience since the start of the COVID-19 pandemic.

Scheduled appearances by Rice and Williams have yet to be announced.

In addition, The View will bring back former hosts during “Flashback Fridays,” as reported by The Wrap. Starting on Sept. 10, the first flashback guest will be Star Jones, one of the original co-hosts of The View’s first season in 1997. Jones co-hosted the show for nine seasons before departing in 2006. No other “Flashback Friday” guests have been announced as of yet.

Behar is the one original co-host still on the program.

McCain, 36, first announced her departure from The View last July, as previously reported by theGrio. After four years on the show, she stated that “it was not an easy decision,” though she chose to leave the show to spend more time with her husband, conservative commentator Ben Domenech, and their infant daughter, Liberty. 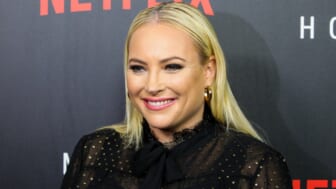 After COVID-19 paused the program in March 2020, McCain and her husband left New York City, where the show airs, to move to Washington D.C. after learning she was pregnant.

The View is following the model of another ABC show, Jeopardy! After long-time host Alex Trebek died of cancer last year, the popular primetime game show has filled his absence with a slew of weekly guest hosts, such as CNN’s Anderson Cooper, NFL Quarterback Aaron Rodgers and actor/TV host Levar Burton.

Burton, a 12-time Emmy winner, received support from fans who petitioned for him to be chosen as the permanent host, leading up to his guest host run in July, as previously reported by theGrio. However, the show’s production team never seriously considered Burton as an option to replace Trebek, according to theGrio.