Dontrell Stephens had been hospitalized for three weeks before his death

A Black man who received a multimillion dollar settlement after being shot and paralyzed by a Florida deputy in 2013 has died, his attorney said Thursday.

Stephens had been hospitalized for three weeks before his death, dealing with bed sores and other issues, Scarola said. He had been left paralyzed from the waist down from the 2013 shooting.

“Dontrell had a very sad and difficult life,” Scarola said. “I hope that as a consequence of the resolution of his case that he had some relief. But whatever relief he had was very short-lived.”

A federal civil jury in 2016 had awarded Stephens $22 million after he sued, an amount Palm Beach Sheriff Ric Bradshaw refused to pay. After years of negotiations, Bradshaw had offered Stephens $4.5 million, but the state Legislature went $1.5 million above that in 2020 and awarded a $6 million payment, which was approved by the governor.

Deputy Adams Lin pursued Stephens, then 20, in his patrol car after Stephens rode his bicycle across a busy road through traffic. Videotape from Lin’s dashboard camera showed that when Stephens saw Lin behind him as he rode into a duplex’s parking lot, he slowed his bike and hopped off.

Lin, an Asian American, testified at the 2016 trial that he thought Stephens was trying to run away and jumped out of his car to cut him off. The video shows that after Stephens hopped off his bike, he walked toward Lin. The deputy is out of sight of the dash cam and Stephens is mostly out of sight when Lin opens fire four seconds after Stephens jumped off the bike. Stephens falls back into view with Lin close behind, still firing.

Lin testified at the 2016 civil trial that Stephens put his left hand behind his back and flashed a dark object that he thought was a gun. The dash cam video, however, showed Stephens had his phone in his right hand and that his left hand was empty. 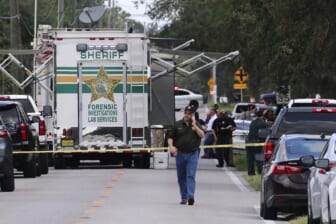 Stephens’ attorneys argued that Lin must have pulled his gun almost immediately after leaving his car as he could not have opened fire so quickly otherwise.

The jury took 3 and 1/2 hours to side with Stephens, ruling that Lin had violated Stephens’ civil rights.

Prosecutors cleared Lin of criminal wrongdoing and he remained employed by the Palm Beach Sheriff’s Office.