Abimbola Adelaja and a pal were called anti-gay slurs, attacked and robbed Saturday night by two men at a Brooklyn bodega.

Two men were attacked inside of a bodega in the Bushwick neighborhood of Brooklyn last weekend, sparking protests in the community.

Abimbola Adelaja, 36, and his unidentified 28-year-old friend were called anti-gay slurs, assaulted, and robbed late Saturday night by two men who stabbed the pair with a glass bottle and a screwdriver respectively, NBC News reported. Police are investigating the attack as a hate crime since the suspects reportedly approached Adelaja and his companion and began making homophobic comments, telling them, “It’s Adam and Eve, not Adam and Steve,” plus calling Adelaja “fa**ot.”

Adelaja suffered a punctured lung, and the other victim was treated for a laceration to his right hand and shoulder.

According to NBC News, Adelaja — a local activist and organizer — organized Wednesday’s march after workers at the bodega offered no help to him and his friend during the attack.

He told the news outlet that after he was assaulted and robbed, he ran into the bodega’s storeroom, and its workers insisted he leave. When he left the back room, he asked store employees for assistance, but they would not allow him to use their phones to call for help. Instead, they kicked everyone outside — where his friend was stabbed seven times.

Adelaja said he ran toward his apartment nearby, but he couldn’t get in and had to flag down a passing ambulance to get help.

Authorities want anyone with information about the incident or the suspects they’re seeking to call the Crime Stoppers Hotline at 1-800-577-TIPS (8477) or 1-888-57-PISTA (74782) in Spanish. Tips can also be submitted on Twitter or via the Crime Stoppers website.

Adelaja organized Wednesday’s march outside of the bodega to protest the fact that none of its workers would help him.

“If someone is in need, you help,” said Adelaja. “I wasn’t expecting them to get involved or jump in, but certainly, you know, getting the phone or calling the cops for me or making sure I was OK are all things that could have been done.” 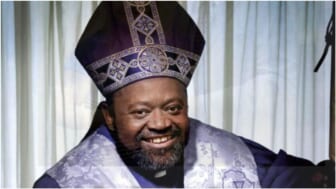 Also Read:
Carl Bean, singer of gay pride hit ‘I Was Born This Way’, dies at 77

The man, who identifies as gay, pointed out there have been several anti-gay attacks in Bushwick this summer.

“It’s terrifying to think you could become the next statistic,” he wrote on Instagram. “Please join us to hold space as a community and let those that wish us harm know that we are not afraid and will never stop living freely and proudly.”

He credited supporters in the trans community like Qween Jean, a popular trans activist, costume designer, and founder of Black Trans Liberation, who helped organize the march.

“We won’t let something like this make us scared. We won’t live in fear,” Adelaja told NBC News. “We’re here, we’re proud people, so we want to hold space to let the community know we’re here, and we’re going to stand up for ourselves.”