When you think of Carmelo Anthony many things may come to mind: future Hall of Famer, 10-time NBA All Star, Olympic gold medalist and more. Anthony is a household name, most notably for how he has changed the game of basketball for the better, but this NBA superstar is now revealing a new layer of himself as an author.

Carmelo Anthony’s memoir, Where Tomorrows Aren’t Promised, takes readers on a journey through the moments that made him the man he is today. Readers are able to see a new side of the NBA star and philanthropist, from his upbringing, his familial background, and the life lessons that stick with him to this day. theGrio sat down with the new Los Angeles Laker turned author to discuss his book, which hits shelves on Tuesday, Sept. 14.

“I felt like the time is now,” Anthony explained about the release of the book. “I’m going all the way with this story and even talking to [co-author] D. Watkins, it was like, ‘Yo, I only want to tell this story. I only want you to help me write the way that I would talk to you if we was back in Baltimore on the block.’…I want people to read it the way that I’m actually saying it, and I’m actually feeling it.”

His approach to the book was to make readers feel as if they were on this journey with him as he made special emphasis to highlight his teenage years and the hardships he faced. One of those challenges was his mental health struggles. The professional athlete chose to open up about his battle with depression and how writing his memoir helped him realize how depressed he had been. 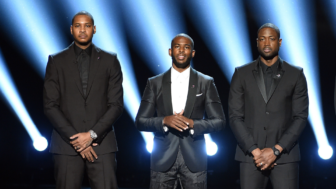 “For me, I didn’t know, you know. I know now looking back, like ‘Damn I went [through] that. I had to be depressed, going through that s***,” Carmleo Anthony shared about his mental health struggles. “So it was, for me, I just like I didn’t know I was depressed until now. Yeah. You know, going through writing a book and telling those stories and then looking back.”

Anthony shared that, often times, he got stuck in the same routine growing up. When he was going through his moments of sadness, the basketball star continued going through the motions instead of addressing it head on. He’s hoping that fans who read his story will hopefully learn from what he faced and seek help.

“I’m writing and speaking to those guys, you know, to those teenagers who may feel lost, don’t know what to do or doing too much, Anthony said. “I’m talking to everybody who’s going through that.”

Another layer of the NBA star that fans are introduced to is his neighborhood of Red Hook and West Baltimore. Both of these cities, though different, played a crucial role in how he viewed many of his familial relationships. Anthony has just two brothers and one sister biologically, but the three siblings weren’t the only people he considered family and who invested in his success.

“[People would say] ‘Melo, get the hell off the streets. Go ahead. Go in the house. You’re going to school,'” Anthony explained. “I had that type of environment around me, even though the environment is what it is or it was what it was. I still had people that was looking out.”

Through the many lows he faced came lessons that Carmelo Anthony still carries with him. One lesson he shared was the importance of patience. This lesson came from a conversation he had with his late cousin, Luck, that he uses as motivation.

For years he wasn’t quite sure what his cousin meant, but Anthony attributes his mellow spirit to remembering that he will get what’s meant for him in due time.

“As I started getting older, I started realizing like what was really meant for you is meant for you. I’m saying, like, don’t force nothing, don’t rush it. It’s going to come naturally. You won’t feel it when you feel it. …If you don’t, then it ain’t right,” he explained.

The book tackles the many issues that men can face as teenagers and Carmelo hopes that young kids will find motivation in his words.

The book centers around all the moments that led up to his being drafted in the NBA, something that Anthony said he did purposefully.

“I just felt like everybody knows Melo, the basketball player, Melo in the NBA. Nobody, unless you grew up with me as a fan, you didn’t know that part of my life. You didn’t know the things that I had to deal with you,” he said. “You heard of Melo from the streets, probably from the projects you heard that. But you didn’t really understand what that meant. I never told that story.”

Anthony’s highly-anticipated memoir, Where Tomorrows Aren’t Promised, hit stands on Sept. 14 and can be purchased here.