Princess Blanding of the Libertarian Party angrily decried her virtual silencing after security removed her from the Virginia gubernatorial debate.

The final gubernatorial debate in Alexandria, Virginia between former Democratic Gov. Terry McAuliffe and the state’s Republican candidate, Glenn Youngkin, was interrupted Tuesday evening by the passionate hopeful from a third-party: Princess Blanding of the Libertarian Party.

Supporters of Blanding interrupted the event early, demanding she be allowed to participate and stating that she was shut out due to racism.

The moderator of the evening’s event, Meet The Press host Chuck Todd, took a break and called for security, who escorted Blanding out of the hall. She addressed local media when she left the auditorium.

“I just made it very clear that I am a candidate to let Virginians know that their censorship of my candidacy is racist,” Blanding maintained. “It is very sexist. It is very oppressive. And it’s a form of voter suppression. Their goal is to make sure Virginians don’t know that I exist so that they feel that they have to choose between the lesser of two evils.”

Blanding angrily decried her virtual silencing for over two minutes. “We have been told to trust the system, and the system is meant to keep third party candidates oppressed,” she said, “to make sure that people don’t know about us.”

The battle between McAuliffe and Youngkin has gotten tighter as the Republican is catching up in the gubernatorial race in the swing state. 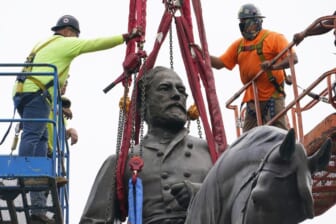 One point of contention has been the level of coronavirus vaccinations in the state. There remains at least 40% of Virginians who have not been immunized against the virus.

“I’m running against a candidate who actually has been spreading anti-vax rhetoric around the commonwealth of Virginia,” McAuliffe contended, per WHSV.

Said Youngkin: “I don’t think we should mandate it. And I think we find ourselves at a moment where my opponent has said — he has looked at the television screen, and he has said — if you don’t get the vaccine, I’m going to make your life difficult.”

Youngkin, the Republican candidate, noted that “the data associated with those vaccines is something we should absolutely understand — the difference with this vaccine.”

McAuliffe tried to label his competitor “a total wannabe Donald Trump,” adding, “You know, he plays this game … and then tries to come here to Northern Virginia and pretend, ‘Oh, I’m some moderate.’ He’s not. He’s extreme.”

“You’re running against Glenn Youngkin. I know you wish you weren’t,” Youngkin responded a few minutes later. “So, let’s have Terry McAuliffe versus Glenn Youngkin, and let’s let Virginia voters decide who they want their next governor to be.” 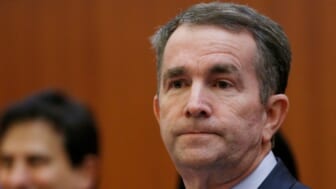 If McAuliffe succeeds his own successor in office, Virginia’s outgoing governor Ralph Northam, the former Democratic National Committee chair will be the first governor since his state’s own Mills Godwin to serve two terms that were non-consecutive.

Jesse Ferguson, an aide to Democrat Hillary Clinton’s 2016 presidential campaign — which McAuliffe chaired in 2008 — has referred to the race as “absolutely a four-alarm fire.” he said.