In a brief interview, Cosby's spokesman Andrew Wyatt contends that his client feels Kelly "was railroaded."

After a New York jury convicted disgraced R&B singer R. Kelly on all nine counts in a federal racketeering and sex trafficking trial Monday, many celebrated the former star’s conviction.

The 54-year-old hit singer-songwriter was accused of sexual misconduct toward dozens of women and men over years, including late R&B singer Aaliyah. Fifty witnesses came forward to testify against Kelly, who was convicted on the charges less than two hours after the case went to the jury in a Brooklyn courtroom.

In a brief interview, Cosby’s spokesman Andrew Wyatt contends that his client feels Kelly “was railroaded.” 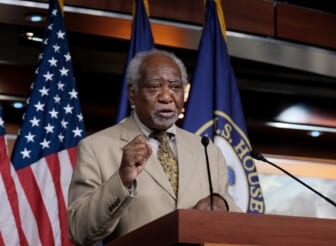 Wyatt accused famed attorney Gloria Allred, who represented several of the victims in Kelly’s case, of parading women out to stir up public sentiment against him. She also represented victims in Cosby’s sexual misconduct case.

“My client’s conviction was vacated by the Pennsylvania State Supreme Court because they saw the truth,” Wyatt said. “What we see in America today, with R. Kelly, is an assault on Black men. And this is an assault on successful Black men who are doing great things.”

“I see R. Kelly having a strong case on appeal. I think that when he gets to the Supreme Court, I think we’ll see the conviction overturned,” said Wyatt. “I think it’s unfortunate that this man, even before he was brought to trial, he wasn’t given bond. He had to sit in jail. We see Harvey Weinstein who was out on bond. We see the Black and white issue. We see the cancel culture issue in America. We see the assault on successful Black men who have wealth.”

Cosby’s sex assault conviction was overturned in July after the Pennsylvania State Supreme Court found that an agreement with a previous prosecutor prevented him from being charged in the case.

His spokeman’s comments are sparking outrage on social media.

On Twitter, one user wrote, “Bill Cosby defending R. Kelly is proof that Cosby has zero sense of morality and is guilty AF.”

“Bill Cosby thinks R Kelly got railroaded. Birds of a feather. Pretty soon Matt Gaetz will be defending him too,” another tweeted.

“R. Kelly can’t read and creates the very kind of music and culture that a usually stuck up Bill Cosby would despise,” noted writer Michael Arceneaux on Twitter, “but the freedom to abuse women without consequences would unite them.”