The person of interest in Marcano's disappearance, Armando Manuel Caballero, was found dead Monday of an apparent suicide

A body believed to be 19-year-old college student Miya Marcano has been found, a Florida sheriff said.

“What we believe to be the remains of Miya was found about 10:45 this morning in a wooded area in the area of Tymber Skan Apartments,” Orange County Sheriff John Mina said Saturday, Oct. 2 during a news conference, adding that a purse with Marcano’s identification was found near the body.

Marcano’s family has been notified, Mina said, but authorities cannot confirm the identity of the body until further analysis is done by the medical examiner.

Mina added that cell phone records revealed a person of interest in Marcano’s disappearance, Armando Manuel Caballero, was in or near the Tymber Skan Apartments on Friday evening between 8 p.m. and 9 p.m. on the evening of Friday, Sept. 24 — the night Marcano was reported missing.

Caballero was found dead on Monday, Sept. 27 of an apparent suicide.

“Everyone wanted this outcome to be different,” Mina said.

This is the latest discovery in the search for Marcano, who was last seen alive on Friday, Sept. 24 at the Arden Villas Apartments near the University of Central Florida. According to a local report, her father said that she was supposed to get on a plane from Orlando to Fort Lauderdale that day, but she never boarded.

Mina announced on Friday, Oct. 1 that the FBI was assisting the investigation, which by that point had expanded into three different Florida counties.

Roughly 175 personnel including over 60 detectives conducted nearly 30 searches since Marcano was reported missing, Mina said Thursday at a news briefing, according to ABC 6.

After announcing the discovery of the body, Mina said investigators acquired cell phone data for Caballero, a maintenance worker at Arden Villas who reportedly lived at Tymber Skan for a period of time. The data placed Caballero in multiple counties over the past six months, which Mina speculated was in an attempt to throw authorities off of his trail. 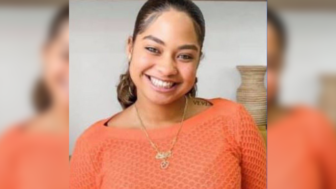 During a news briefing Thursday, Sept. 30, Mina said officers executed a search warrant of Caballero’s apartment and car after his death.

At 4:30 p.m. on the night Marcano was reported missing, records showed Caballero entered Marcano’s apartment, according to Mina.

“We can’t imagine the pain and anguish that Miya’s parents, her family, the loved ones and the friends and really, our entire community have gone through and will continue to go through,” Mina said on Saturday, offering his deepest condolences on behalf of the Orange County Sheriff’s Office.