“Students are really suffering, it’s a totally different day and age,” one HBCU student said at a protest in Atlanta.

Students attending historically Black colleges and universities (HBCUs) in Atlanta are coming together to protest living conditions and inequities at their institutions.

A collective of students, organizers and activists from Morehouse College, Spelman College, Clark Atlanta University and Morris Brown College — collectively known as the Atlanta University Center (AUC) — have joined forces to form the ATL Student Movement Takeover. Since Monday afternoon, dozens have gathered to demonstrate at the AUC across from Rush Memorial Congregational Church, the same area where students gathered to protest in 1960, according to organizers.

Inspired by recent protests at Howard University, several of the Atlanta students slept in tents for two straight nights in cold temperatures reaching 40-something degrees at some points. Organizers say 16 students protested overnight on the first day of action.

TheGrio was on the scene to hear first-hand testimonies from HBCU students who created an open space for people to share grievances, which included claims of mold in dorms and showers, broken washer and dryer machines, ants in buildings, lack of access to housing and more. They are calling for access to more student housing, Title 9 transparency, broadband access, dormitory cleanliness among other demands. 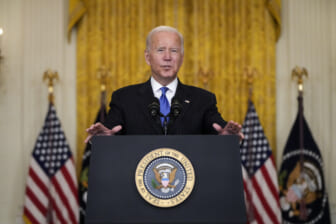 Also Read:
Biden isn’t cutting HBCU funding, but here’s why his $45B proposal will likely be slashed

Three different Spelman students spoke with theGrio and shared how they did not have working AC during their hottest months on campus at the start of the school year.

“As a freshman, I got put into dorms that have no AC, and as some may know, Georgia in the summer is very hot,” Spelman freshman and student organizer Jahni Lane-Foster told theGrio. “It’s things like that that make me angry because you see on the news and social media, the illustrious Spelman, #1 HBCU, but we’re not living in those #1 illustrious conditions.”

Students plan to continue protesting and spending the night in tents until their demands are met. Signs surrounding the protest share messages like “HBCU Students Matter,” “Student Power,” “Proper Allocation of Funds,” “We need our CARES Act + HEERF Fund” and “Tell Old Joe Raise The Budget.”

Student leader and Morehouse College senior Marcellus Kirkland told theGrio that the group started the protest for three main reasons: “the housing crisis in the AUC,” “the cut in federal funding for HBCUs” and “to stand in support with brothers, sisters and siblings at Howard University.”

“We’re not going against our institution or against our administration, we’re fighting for better, not only from our HBCUs but for our HBCUs because it is HBCUs that set the standard for any Black advancement in our society,” Kirkland told theGrio.

Kirkland served as 1 of 4 student negotiators who attended a meeting with Morehouse President Dr. David Thomas on Tuesday where they presented their list of demands pertaining to Morehouse and learned about new resources like an emergency fund for students to access. He stressed the importance of donors supporting the fund as it directly supports the students.

As the fight continues, the young leaders are hopeful for improvements and credited the president for approaching them three hours into day one of protesting to hold the meeting with him. Other students and Morehouse representatives were at the meeting, including head negotiator and Morehouse senior Malik Poole.

“This meeting does not mean that our demands are met,“ Poole said. “This is far from over even though we had that minor success.”

“Morehouse College is the intellectual birthplace of the modern Civil Rights Movement and preparing students to express themselves as leaders and involved citizens is what we do. Morehouse students know that they don’t need a demonstration to meet with the president, as he often engages in one-on-one dialogue with students while walking the campus, attends student functions, and hosts groups of students in his home on campus.

President Thomas was happy to spend more than two hours with a group of students on Tuesday to hear and address any concerns they may have. The discussion highlighted broad common ground, provided additional clarity about existing funding available immediately for students with financial needs, spotlighted student leaders currently engaged with the administration as College trustees and institutional committee members, and identified some areas the administration will work collaboratively with student leaders to address. The group was also encouraged to work with their elected student government officials to fully understand existing opportunities for students to directly influence decision making and operations at the College.”

While the students say the meeting went well and the administration agreed on many of the requests, they say they will proceed with “cautious optimism” and keep fighting until demands of all four participating Atlanta HBCUs are met.

“Students have always suffered but it’s very taxing on mental health these days and I want people to recognize that the things that may seem minimal like a little mold, transportation, or ‘just go get an apartment because you didn’t get no housing’ — these are things that break us down mentally and cause us to perform poorly and then ended up getting kicked out of school. So we’re stuck in a cycle that we’re trying to break and that’s why we’re out here right now,” King told theGrio.

As reported by the Atlanta Journal-Constitution, the Atlanta HBCUs receive less funding from philanthropists and foundations, and while donations went up last year, a majority of the funds go toward student scholarships. Experts say issues around aging facilities and HVAC upgrades are far greater at HBCUs.

When speaking with parents about these issues, one mother who wants to remain anonymous told theGrio she would like to see more transparency in the way funds are allocated at Atlanta HBCUs.

And while protesting against the conditions at HBCUs will continue, students also stressed how much they will continue to be an advocate for Black high school students to attend HBCUs and appreciate what they have to offer.

“Everywhere is going to have their problems and just because the problems of HBCUs are publicized more than that of PWIs (Predominantly White Institutions) doesn’t mean that this isn’t a very special place to be,” Kirkland said.

Georgia Stand-Up CEO Deborah Scott, who serves as a mentor, friend and colleague to the students, has been supporting their efforts on the ground. Scott attended Clark College before it merged with Atlanta University to became Clark Atlanta University and echoed the same sentiment.

“I had an excellent education here, but they also taught me how to fight. They taught me how to stand up and to fight for our people and how to organize and so they cannot expect us to learn these lessons and not apply them in real life, even toward our own institutions,” Scott told theGrio.

Howard University alum DeAndre Gates, who serves as the execution strategist with The Live Movement, one of the lead organizations coordinating the Blackburn Takeover in D.C., is also supporting the students in Atlanta and says he’s proud of their fight.

“It is powering the movement, it is changing the movement, and these students are really a part of history and I hope this ignites and inspires other HBCUs across the country,” Gates told theGrio.

Students and organizers encourage anyone looking to get involved with the movement to follow @asm.takeover on instagram.

TheGrio reached out to the schools’ administration Tuesday evening and have not received a response or a statement from Clark Atlanta University and Morris Brown as of Wednesday evening.

“Colleges at the AUCC recognize the multiple challenges our students faced this year. These challenges included the need for financial aid, including housing and transportation assistance. Each of the colleges disbursed record amounts of scholarship aid, cleared balances, and provided unprecedented amounts of emergency funding. We welcome support from the Atlanta community as we continue to seek support for our deserving high need high performing students. Long term, we are all assessing the need for more resources to support our students.”

Howard University shared a statement responding to the protests on their campus which you can view here.