Black driver, 24, dies after being tased during traffic stop

He was tased in the back by an officer, "causing him to fall on the ground," according to Georgia officials

A 24-year-old Georgia man has died after being tased by police during a traffic stop.

According to official reports, during the Oct. 12 incident in Augusta, Richmond County deputies reportedly found a gun and a crack pipe inside the SUV that Jermaine Jones Jr. was in, along with two other people. When Jones attempted to flee the scene, he was tased in the back by an officer, “causing him to fall on the ground,” multiple news outlets reported.

“After being tased, multiple officers detained him,” state investigators said in a news release. “There was a struggle between officers and Jones in the attempts to detain him.”

Jones was being transported to the Richmond County jail when he began experiencing “symptoms requiring medical treatment.” He was hospitalized in critical condition. Two days later, Jones was comatose with serious brain injuries, and four days later he was pronounced dead at Augusta Medical Center.

Jones’ father, Jermaine Jones Sr., who was at the traffic stop, told WFXG his son was coherent after he was tased and that the deputies on the scene brutally beat his son.

“They started swinging on him, hitting him, hitting his body parts in the head and stuff,” he told the TV station. “He wasn’t resisting. They was all on his stomach. He said he couldn’t breathe.”

Four deputies with the Richmond County Sheriff’s Office — Richard Russell, Leslie Gaiter, Parker Leathers and Christopher Brown have reportedly been placed on leave amid an investigation into Jones’ arrest.

In the meantime, the victim’s family is waiting for body camera footage to provide details of exactly what happened.

WRDW reports that Investigator Russell renewed his Taser certification in 2020. He is the officer on record for firing the taser. They say that data from that taser, per a 2019 Richmond County Sheriff’s Office handbook, would reveal how long Jones was tased in a report.

In August, per WRDW, Gaiter, one of the four deputies at the scene, was investigated for ‘rushing’ toward a woman recording her son’s arrest. While he may have faced internal discipline in that case, he was not placed on leave. 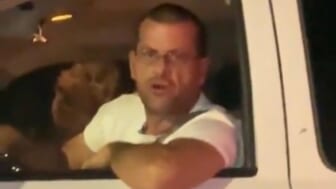 “I don’t have faith in the justice system,” said Gaines. “But I’m not going to give up.”

She added, “I want my son’s name — he’s going to be heard until I can’t shout it no more.”

When the body-camera footage is released, the family intends to protest, per the report.

“Once these videotapes come back, they’ll hear a whole lot more,” Gaines said.