EXCLUSIVE: "You're placed in a sort of place of what you know is privilege, being lighter skinned, and yet, it is anger and resentment and guilt that comes [with that]," says Negga.

Shot in black and white and directed by first-time director Rebecca Hall, Passing tells the story of Irene (Thompson), a Black woman who’s world is turned upside down when she’s reacquainted with Clare (Negga), a childhood friend who is now passing for white in 1920s New York City. The two friends must confront racism, identity, jealousy and more in the film, which is based 1929 novel written by Nella Larsen.

In an exclusive interview with theGrio, Thompson revealed that her character, Irene, is facing profound crisis within herself when the audience meets her in the film.

“It disturbs her,” Thompson said about Irene’s reaction to Clare’s passing. “But I think disruption can be exciting, and I think it’s something that she craves. It’s also intentional in our film because when Clare is not in the picture, there’s a kind of monotony. It’s why we have these very repetitive scenes of Irene walking throughout the seasons, the same walk home, sitting in the same chair. There’s a kind of life and excitement, which is unsettling sometimes, that both Clare and Ruth’s performance brings into the film that is essential and important.”

Both Thompson and Negga revealed that they drew on their own experiences as multiracial, light skin Black women when making the film (Negga is of Black and Irish descent, while Thompson is of Afro-Panamanian, Mexican and European descent). Working on a film that tackles colorism and identity, the women examined their own privilege as light skin Black actresses in Hollywood.

“You’re very much aware of — not where you’ve placed yourself but where you were placed. And that’s sort of infuriating as well because you’re placed in this orbit,” Negga shared. “You’re placed in a sort of place of what you know is privilege, being lighter skinned, and yet, it is anger and resentment and guilt that comes [with that]. How do you navigate that with wanting to be part of the wider community and not just siloed away into it.”

“Because for years, you’d turn up to auditions and you could just guess, literally, the colors of the people you would be auditioning with — like, you could just assume. That, to me, is just so depressing. I don’t know if it’s gone away. …We will know, in a few years or so. Even speaking about it, it’s strange, because it’s been so taboo for years.”

Colorism in casting is not new, but has been called out by critics in recent years. Films such as 2016’s Nina, which cast Zoe Saldaña as Nina Simone, 2018’s The Hate U Give, which cast Amandla Stenberg as the brown-skinned Starr Carter, and most recently, Zazie Beetz casting as Mary “Stagecoach Mary” Fields in The Harder They Fall have faced accusations of “light washing” and colorism. 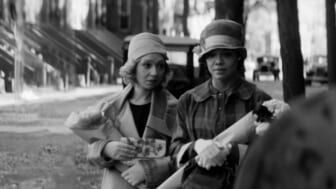 Thompson told theGrio that she has become aware of this prejudice and now feels empowered to confront and change the status quo through the kind of roles she accepts after struggling to navigate her privilege in years past.

“I think being able to speak about it, being able to acknowledge it when you’re in that room and go, ‘something is rotten.’ Because the truth is a film like this — obviously women like us, light-skinned women, need to exist inside of this narrative,” Thompson explained. “Some would argue maybe lighter than us, you know, more white passing than us. We’ve had that, that people say that about us, right? But the truth is, we exist in all sorts of narratives.”

She continued, “I think when I was younger, I wasn’t aware enough because I was just trying to survive in my way, to get the job. I wasn’t aware enough to think about the implication of me inside of a story, inside of worlds. Now, I feel like I have that understanding and I can navigate it better, you know. And also hold folks that I have access to accountable to that and advocate from the inside, and I didn’t know how to do that some years ago. I think that’s a measure of responsibility.”

Speaking to her character’s light skin privilege, Negga shared that Clare “seems to have no worries or fears” about re-immersing herself back into the Black world after several years living as a white woman with a white husband and white child. Finding the right balance between fear and faith was perfected by working with Thompson, according to Negga. 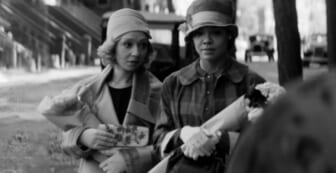 “Clare is very at ease in her own skin, even as she’s complicit in this big lie. And Irene is not,” Negga explained. “She’s frightened of being found out. I think those kinds of themes—the themes of where these women placed themselves in the world and how comfortable they are in their own bodies in the various worlds they’re in—is very much continued throughout the film.”

“That’s something that really interests me in the physicality of the two women. Because even though they’re quite distinct, they both have a sensuality to their movements. They both definitely come from the same source of…wellspring of being in their bodies. [Tessa] lent [Irene] that and I think it’s really beautiful.”

Passing is available to watch now in select theaters and will stream on Netflix on Nov. 10. Fans can watch theGrio‘s interview with Thompson and Negga above.