theGrio is honoring these advocates for their work in education

The world owes so much to Black women.

It’s really enough to end it right there, but in case some receipts are needed, that statement is perhaps most true when applied to the work Black women have done to reopen our nation’s schools during the dueling pandemics of COVID-19 and long standing racial injustice.

For the Black women that I know and work with, the conversation about the return to in-person learning for our students has been more than just flipping a switch and unlocking a classroom door. It has been a battle to raise the bar and ensure our students have the best neighborhood public schools possible.

For the entirety of this pandemic and especially during the past couple weeks of school, these five Black women have been on the frontlines demanding an equitable and racially just reopening for the nation’s public schools.

In simpler terms, these women have been pushing back against the forces that want to ban the teaching of America’s true history, continue the disinvestment in Black and brown neighborhood schools and implement strategies posing a danger to our students and communities.

This includes banning mask mandates in schools, limiting access to COVID-19 testing for students and educators, and putting local law enforcement goals ahead of creating the safe and thriving environment necessary for our young scholars to learn, grow and become productive members of society.

Beyond pushing back, these living examples of #BlackGirlMagic have fought forward and challenged many of the remaining vestiges of racial inequities in our classrooms. As a result, our students now attend classrooms with upgraded ventilation systems and our nation’s educators have more resources thanks to funds provided by President Joe Biden’s American Rescue Plan.

Now I want to tell you about these incredible women who have put their bodies and reputation on the line, risking it all for our children and the safety of their school community.

Cecily Myart-Cruz is a courageous leader who has the battle scars to show for it. Her fight for the right of Black children to attend great public schools has made her a regular target of conservative media, but that hasn’t stopped her vigorous fight.

As the first-ever Afro-Latina elected as president of the 33,000-member United Teachers Los Angeles (UTLA), Cecily, a mother of a public school fifth grader, will make you truly believe that educators and community united together can achieve anything.

When students, parents and community members began organizing to get police out of Los Angeles public schools, Cecily was right there with them.

Since taking on the role of UTLA president in the early months of the pandemic, Cecily has worked with her members and the Los Angeles community to keep students and community members safe. In the early days of the pandemic, when every other school system and school leader was afraid to call for schools to close until students could safely learn in person, Cecily counted among one of the first voices to push for COVID-19 school closures.

When it was time for schools to reopen, Cecily and UTLA worked with the community to demand and ensure updated ventilation systems and some of the safest mitigation standards. As a result, our young people in L.A. and throughout the country are a little safer.

Cecily’s critics have unfairly assessed her fervent advocacy for Black and brown students and families. They have attacked her leadership style, her level of activism and even her appearance. Yet, Cecily, a 26-year veteran English teacher, has been unrelenting, because, for her, Black students and their families matter. 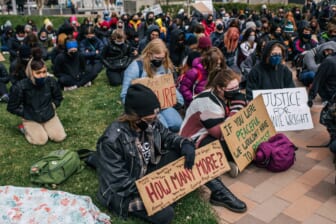 For Stacy Davis Gates, a native Chicagoan who’s an educator, vice president of the Chicago Teachers Union and mother of three Chicago Public Schools students, there is nothing more important than nurturing and caring for young people.

Stacy is a living example of why we need more real people and community voices at the table.

Normally in Chicago, the teachers union and their contracts with the school system center on wages and working conditions. That changed in 2019, when Stacy and rank-and-file educators in the CTU made it clear that students’ emotional health and well-being affect working conditions, which, in turn, directly impact students’ learning conditions.

This redefinition garnered major wins for Chicago’s homeless and most vulnerable youth, in turn influencing how they learn and continue to survive the COVID-19 crisis.

Beyond that, Stacy loves her community. Not only was she a leading voice in developing a national framework of school re-opening during a global pandemic, but everyone, from Chance the Rapper to President Joe Biden, have acknowledged the work of the CTU and its fight for Black and brown students.

Over this summer, Stacy and a group of Chicago educators spent their days knocking on doors and hosting virtual town halls, outdoor community meetings and mutual aid events in an effort to educate Black parents and families about the importance of vaccination and back-to-school safety protocols.

In Chicago, Stacy is a crucial piece in the fight for Black liberation, and Black students getting a safe, equity-based and high quality public education.

Her students know her as Mrs. Pringle, the science teacher. And trust me, she knows and believes in science and truth. For more than 31 years, Becky Pringle has been on the frontlines of the fight for communities of color and their classrooms.

As a self-described “Black girl from North Philly,” Becky’s role has become more vital and prominent during this pandemic than at any other time. As the first Black woman to lead the nation’s largest teachers union, she has been a leading voice in the battle for teaching America’s true history in classrooms throughout the country.

As the hyperbolic and mostly inauthentic critical race theory debate rages on, Becky has been one of the most outspoken voices for truth and honesty in the teaching of American history and the addition of a culturally competent curriculum for all students.

Becky isn’t an advocate for teaching “critical race theory” in classrooms, but teaching “truth theory” to America’s students, what she describes as honesty in education.

As a science teacher, Becky has also been a supporter of science and a realistic return to in-person learning. Her realism influenced her strong advocacy for Black students and families with the Biden Administration, which resulted in the allocation of $119 billion in American Rescue Plan funds for America’s public schools.

Pringle’s advocacy for Black youth is so fierce, that she and AFT President Randi Weingarten counted among some of the first individuals to meet with the Biden Administration after President Biden’s inauguration. 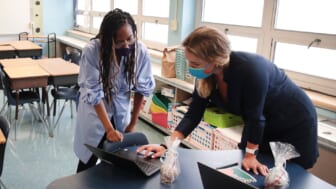 Ronsha Dickerson is a mother of six beautiful Black children. She could have looked out for her own interests, but instead has made the choice of dedicating her life and work to empowering, inspiring and pushing forward for better schools for all our students.

As one of the lead organizers for Journey for Justice, a network of parent and community members committed to campaigning for equitable and world-class schools that Black and brown children and families deserve, Ronsha has put her body and health on the line during this pandemic to improve learning conditions in New Jersey and throughout the country.

While COVID-19 was rapidly moving through New Jersey’s Black and brown communities, Ronsha was there to hold the school system accountable and ensure that young people had access to laptops, internet and virtual learning portals.

Beyond that, Ronsha has been instrumental in hosting education listening tours to uplift the voices of Black and brown parents around the country. She was also one of the first people to respond to families in need after Hurricane Ida battered Louisiana.

To say that Ronsha is a voice for Black parents would be an understatement. Ronsha is a megaphone! Not only is she leading several large-scale national mobilizations, but in 2019 she worked alongside other organizers to pull off the first-ever Presidential Townhall on Public Education, which many believe set the stage for the historic $125 billion investment in public education made in the American Rescue Plan.

Zakiyah Ansari is a warrior. To be honest, you realize that within the first couple minutes of hearing her talk. For more than two decades, Zakiyah has been steadfast in the fight for equitable public schools in New York state and throughout the country.

As the advocacy director and New York City director for the Alliance for Quality Education [AQE], Zakiyah was instrumental in ensuring that New York students and their families didn’t have to deal with standardized testing, all while battling the heinous impact laid bare by the COVID-19 global pandemic.

Additionally, Zakiyah has become a wizard at New York state budgeting and the staunchest advocate for more investment in the Empire State’s public schools. Over the last three years, Zakiyah and AQE’s work has led to an increase of more than $3 billion in state school aid and an additional $300 million in community schools. These funds will go directly to Black, Brown, and vulnerable families throughout the state.

During these dueling pandemics, Zakiyah’s work as an organizer has been able to shine even brighter. Beyond working in New York, she has become a trainer, speaker and mentor to other parents and community members throughout the country, who are interested in getting more equitable public schools in their neighborhoods.

No matter what type of school the children in your life attend — traditional public school, charter school or private school — you have these Black women to thank for setting the gold standard on what our children need to learn, grow and thrive during these dueling global pandemics.

For that, they deserve both our praise and their flowers.

Keron Blair is the executive director at Alliance to Reclaim Our Schools.