The Congressional Black Caucus (CBC) reigned victorious following the House passage of the $1.75 Infrastructure Investment and Jobs Act as a part of President Joe Biden’s larger Build Back Better framework on Friday.

The plan, which is the largest public works bill since Eisenhower’s Interstate Highway System in 1956, includes significant funding for fixing roads, bridges, tunnels and transits, as well as rebuilding some airports.

It also includes increased funding for HBCUs, an increased child tax credit, affordable housing, an expansion to Medicare and more — all of which were key priorities for the Congressional group.

A group of leaders with the CBC went to House Speaker Nancy Pelosi’s office to negotiate the immediate passing of the infrastructure bill and a good-faith vote on the larger bill prior to the mid-November final vote. Pelosi agreed.

The CBC Chairwoman Joyce Beatty then went out to reporters and advocated for President Biden’s passing of the framework. The passage of the bill in part fulfilled the promises he made to the Black community during his presidential run and was a welcome development after the lack of progress relating to voting rights and police reform issues.

“The American people have made clear one overwhelming thing, I think,” said Biden on Saturday, as he celebrated the approval of the public works legislation, which was passed with a 228-206 vote. “I really mean it — all the talk about the elections and what do they mean? They want us to deliver.”

Beatty said that the victory is progress but not perfection.

“Whether we’re agreeing with one another and not, it’s all how progress happens,” she said adding that Biden needs to show up for the CBC who got voters in their district to vote for him.

Several members of the CBC explained how different parts of the bill will help the Black community as a whole.

“We know the expanded child tax credit has already cut child poverty nearly in half, lifting millions of Black children and families out of poverty,” said the caucus’s first vice chairman, Steven Horsford.

“In the months after the first child tax credit payment went out the number of Black families who didn’t have enough to eat dropped by 25 percent. That is real progress.” The program will provide parents with $300 a month per child under 6 and then $250 for children ages 6 to 17. 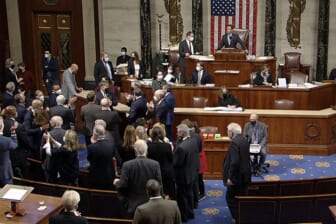 Representative Hakeem Jeffries, the Democratic Caucus chairman and member of the CBC, added that the CBC represents the communities that have “the most to gain.”

Despite the gains, some democratic representatives did not vote in favor of the bill.

Members of “the squad,” which consists of progressive representatives including Alexandria Ocasio-Cortez, Ilhan Omar, Ayanna Pressley and Rashida Tlaib, argued that the passing of the infrastructure package impeded on their leverage for the bigger bill, which would include funding for climate change programs and paid family leave.

In a White House statement released on Sunday,  Biden said he was “proud that a rule was voted on that will allow for passage of my Build Back Better Act in the House of Representatives the week of November 15th.”