National Brotherhood of Skiers: Diversifying the slopes one mountain at a time

“NBS works to identify, develop and support athletes of color that are going to win international and Olympic competitions representing the United States. That is our mission right now," says Henry Rivers

It was the winter of 1997. Henry Rivers vividly remembers the ski trip to Vail, Colorado. The cool crisp air, the freshly fallen snow, and thousands of skiers and snowboarders who looked just like him.

“There were 5,000 Black people in there, all smiling, all with the best looking gear you could imagine,” Rivers explains. “Then you look up the hill and you’re seeing people skiing down. I mean, just expert skiers coming down. I was just like, ‘Wow.'”

Those winter sports enthusiasts were there for the National Brotherhood of Skiers Annual Summit, an organization created by Ben Finley and Art Clay.

Rivers, who currently serves as the president of NBS tells theGrio how the founders met in 1972 through a mutual friend. Finley was president of the Four Seasons West Ski Club of Los Angeles and Clay was Trip Director of the Sno-Gophers Ski Club of Chicago. 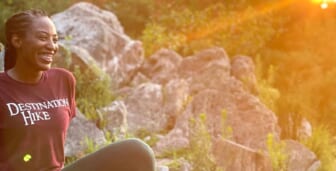 Also Read:
The Great Black Outdoors: How one hiker is changing the narrative with Destination Hike, LLC

“These were two young Black skiers back then from different clubs — one from Chicago, one from the L.A.,” he says. “They got together and organized what has become the National Brotherhood of Skiers. Initially it was just 13 clubs that they got together with.”

Currently, there are more than 50 NBS clubs in 43 cities across the United States.

The non-profit strives to get more Black and Brown people interested in winter sports, especially those in the inner-city.

Their winter outreach programs help kids as young as 8 years old make it down the slopes.

“We direct them and explain everything that’s required to partake in skiing or riding,” Rivers explains. “Then we have trips to the mountain. We’ll take 50 youths to the mountain, provide lessons, lift tickets, and instruction equipment so that their first time on the mountain will be productive.”

The organization aims to help professional skiers and riders make it to the podium through their Olympic Scholarship Fund.

“NBS works to identify, develop and support athletes of color that are going to win international and Olympic competitions representing the United States. That is our mission right now,” says Rivers. “Bonnie St. John was a Paralympian, Ralph Green was a Paralympian. Then there’s Errol Kerr, who competed for Jamaica, and was a ski cross Olympian. You know, we’ve had several of our athletes make the U.S. ski team.”

And even if competing is not the end goal, Rivers says that’s okay. Skiing and riding are activities anyone can benefit from, as long as they’re willing to give it a try.

“Everybody needs to get out there and enjoy what’s there,” he explains. “Whether it’s hiking, skiing, snowboarding, snowshoeing, it doesn’t matter. There’s just so much, you know, you commune with nature. It changes the way you feel. It changes your total outlook. And we need to really do that.”

The National Brotherhood of Skiers is gearing up for the annual summit from Feb. 5-12 in Snowmass, Colorado (Aspen). To learn more about the summit and the organization, visit nbs.org.