Jamie Moore has been charged with two counts of second-degree child endangerment.

Jamie Moore, the mother of JaShyah Moore who disappeared for nearly a month, was arrested and charged with two counts of child endangerment on Friday.

Essex County prosecutors accused the mom of neglect and physical abuse after JaShyah was found in New York City on Thursday. Moore is facing two second-degree child endangerment charges, each of which carries a maximum 10-year prison sentencing and fines up to $150,000.

The New Jersey mom’s 3-year-old son has since been removed from her custody, according to prosecutors.

Community-wide efforts to find the 14-year-old spanned from several search parties, including one with the FBI, to a two-week series covering the teen’s disappearance on PIX11 News called “The Missing.”

The Essex County Sheriff Armando Fontoura’s Crime Stoppers Program even offered a $20,000 reward for any information leading to the safe return of JaShyah. 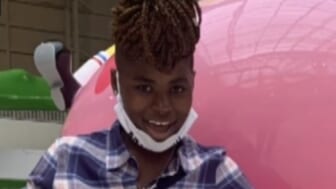 “I feel like somebody may have her against her will and that’s why she hasn’t called me,” said Moore to ABC News on Wednesday, after her daughter had been missing for almost a month.

She told PIX11 that her daughter lost the family EBT card during a trip to the deli, went back to retrieve it and never made it home.

The concerned mother said she then tried to retrace JaShyah’s steps to find her and the card.

However, another family member said that Moore got very angry and cursed at the girl.

The teen had cut off her braids and told the good Samaritan “no,” when they asked if her name was JaShyah.

Once taken to the police precinct, she revealed her identity and said that she had not been happy at home.

Officials report that the girl traveled by herself to New York, and spent time in a Brooklyn homeless shelter. They said that she seemingly didn’t want to be recognized or found.

“Obviously, this was an extremely resilient and resourceful young lady, and she decided she wanted to be someplace other than where she had been,” said Essex County Prosecutor Theodore Stephens, adding that the girl was not abducted but a runaway.

The girl was evaluated at a New York hospital and was reportedly in good physical condition.

“I fell to my knees, I was so happy,” said Moore after her daughter was found. The mother said that the police never issued an Amber Alert for her daughter, although those alerts are normally reserved for kidnapping cases.

Stephens says that JaShayah was not registered in school after the family moved from Irvington to East Orange.