Faizon Love says it time for a Black ‘Elf’ remake

Faizon Love thinks it’s time for Santa to get a new helper — and this time, a Black one.

The comedian spoke with TMZ about the potential Elf sequel which is reportedly in the works. The original 2003 Christmas comedy starred Will Ferrell as Buddy, an orphan who grows up with elves at the North Pole.

Ferrell reportedly turned down $29 million to reprise his role in the holiday classic.

“I think America is ready for a Black Elf,” said Love, who originally played Ferrell’s boss in the movie, but said he has no problem stepping into Ferrell’s role.

“We had a Black president. (We) had an orange president. And now it’s time for a Black elf,” he joked.

Elf has easily cemented itself as a holiday classic, in part due to the charming performance of Buddy throughout the movie.

The movie’s plot begins when orphan Buddy accidentally crawls into Santa’s bag on Christmas Eve and is transported to the North Pole.

Santa’s elves welcome the human child, and he grows up with them performing elf duties.

Soon Buddy discovers that he is a human and is tasked with getting his biological father back on the good list while navigating his newfound identity on the streets of New York.

The movie became a box office hit and grossed over $220 million. An adaptation of the film even made it to Broadway. 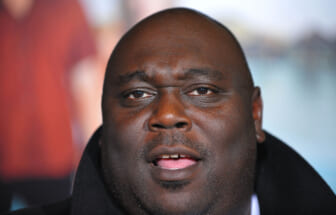 Fans were shocked when Ferrell opened up to The Hollywood Reporter in October 2021 about refusing offers to do a sequel for the film.

“I would have had to promote the movie from an honest place, which would’ve been, like, ‘Oh no, it’s not good,’” said Ferrell, who explained that turning down the money was not hard because he didn’t think the sequel could live up to the original.

“I remember asking myself: could I withstand the criticism when it’s bad and they say, ‘He did the sequel for the money?’ I decided I wouldn’t be able to. I didn’t want to wander into an area that could erase all the good work I’ve done – but you watch, I’ll do some sequel in the future that’s crap,” he added.

Love said that very few could have made that decision.

“I was surprised he turned down that much money,” he said, adding that “it must be good to be white.”

The Cuban-born actor has had memorable roles in several films like B*A*P*S, Friday, Don’t Be A Menace, Couples Retreat and The Meteor Man.

There are no updates on if and when Elf 2 will come to theaters.