NHL’s Evander Kane points gun at estranged wife in video; claims it was for photo shoot

Kane's team claims the video is "intentionally taken out of context."

Evander Kane’s estranged wife posted a video on social media Wednesday showing the NHL star pointing a gun at her.

Anna Kane said the firearm was loaded but the former San Jose Sharks star claims the footage is not what it appears to be, TMZ reports.

In the clip, the NHL player is seen walking into a garage with the gun before he points it at Anna. 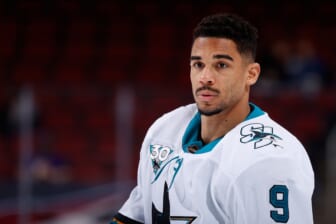 “Pointing a loaded gun at me,” Anna said in the video’s caption, adding, “Psycho path.”

Evander’s team has fired back at the perceived narrative, claiming the video is “intentionally taken out of context” – and that Anna, who is divorcing Kane, is attempting to “smear” him in the public eye.”

“She posted videos, taken intentionally out of context, of a professional photoshoot that both parties participated in back in 2020,” Evander’s attorneys said in a statement to TMZ Sports. Kane’s agent, Dan Milstein, released a statement Thursday also echoing those claims.

The attorneys noted that Anna’s “conduct, unfortunately, is consistent with her prior actions throughout this [divorce] case.” Among her alleged antics is falsifying a pregnancy for months.

“Ms. Kane’s allegations are unfounded,” they added. “Evander remains hopeful that Ms. Kane will get the help she needs and requests privacy for all involved.”

Amid the former couple’s contentious divorce, a court order prohibits Anna Kane from posting about her ex on social media, which she violated “several times over,” according to the statement.

“Each time, we hope it will be the last. Each time, we strive to keep the peace and put the best foot forward. Each time, Evander is exonerated and Ms. Kane’s allegations are unsubstantiated. Evander continues to hope Ms. Kane gets the help she needs, and requests privacy for everyone involved,” according to the statement.

In a post on her Instagram story, Anna wrote, “It doesn’t matter what I say, or what any of his victims say, there will always be some excuse, followed by a lie. Just like now this ‘photo shoot’ I was apparently involved in.”

On Wednesday, the former couple appeared in court where Evander Kane was given sole custody of their 16-month-old daughter, Kensington. His ex-wife must undergo psychiatric evaluation before she is granted supervised visits with the child, according to reports.

Earlier in the year, Anna Kane accused her ex-husband of gambling on his own games, theGrio reported. Kane, who has admitted to having a gambling problem, denied that he ever bet on his own games in a statement he posted on Twitter.

“I have NEVER gambled/bet on Hockey, NEVER gambled/bet on a Sharks game, NEVER gambled/bet on any of my games and NEVER thrown a hockey game,” he wrote on Twitter. “The facts are I personally had my best season of my career last year and was the most consistent I’ve been throughout any season, I’m proud of that. I love the game of Hockey and would never do any of what was alleged. I look forward to cooperating fully with the league’s investigation, having my name cleared and looking forward to this upcoming season.”

On Thursday, Anna Kane posted a statement on her social media account that read in part, “Evander Kane has been given a pass over and over again. The pain he has inflicted on so many others has gone unrepremanded. (sic) He gets away with it because of “who he is” and “no one will believe you” as he loves to threaten. He’s been given a pass by his family, the NHL and evaded charges by always being “one step ahead.”

She continued, “One broad question I’ll ask is why so many others have come forward with allegations about this man? Why is he in several lawsuits at any given time? I understand as a public figure some people will question motives and wonder if there’s financial motivation but how could that possibly make any sense when it’s public knowledge that this man has gambled away every dollar he’s ever made and then some.”

“I am just one of many victims that this man has sexually, physically and verbally abused. The torment of threatening to take the thing I love most in the world, my daughter Kensington, is where I draw the line. There needs to be justice. I am asking that the world finally hold this man accountable more than anything so the damage he causes finally stops,” Kane said.

The NHL conducted investigations and did not find evidence to support her claims of abuse or that he bet on Sharks games. In October, Evander Kane was suspended for 21 games without pay after violating the league’s COVID-19 protocols. The former Shark reportedly filed for bankruptcy in California in January, listing $26.8 million in liabilities.

Kane was recently reassigned to the San Jose Barracuda after being waived by the Sharks following his suspension.