At least two Amazon workers have died and others were confirmed injured on Friday night following the collapse of an Amazon warehouse near East St. Louis, Illinois. The facility collapsed after tornadoes and strong storms hit the area.

According to police, the two bodies were found after rescuers searched the rubble on Saturday. Police Chief Mike Fillback told reporters that several more people remained unaccounted for.

“We’ve been closely monitoring the terrible situation in Edwardsville, and are heartbroken over the loss of our team members,” Amazon CEO Andy Jassy posted on his Twitter on Saturday. “Our thoughts are with their families at this difficult time.”

The tragedy local police and fire departments have termed a “mass casualty incident,” happened when a football field-length wall and the warehouse’s roof collapsed around 8:30 p.m. on Friday, entrapping employees.

According to Fox 2 News, as many as 50 to 100 employees were inside the building during the collapse.

Nearly 100 emergency vehicles from service departments in the surrounding area arrived on the scene, where reports said nearly a dozen of employees were trapped.

At least 30 workers were bused from the facility to Pontoon Beach to be reunited with their families, said Fillback. However, Fillback said the official count is unclear because the warehouse did not have “a set staff.” 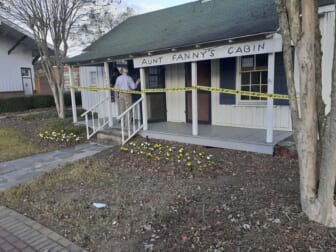 Numerous deadly tornadoes ripped through the Kentucky bend and states in the midwest, including  Illinois, Kentucky, Missouri, Tennessee, Arkansas late on Friday.

According to the Associated Press, at least five deaths have been confirmed including three in Tennessee, one in Arkansas and one in Missouri.

The death toll is expected to rise, with Kentucky Governor Andy Beshear warning that the tornadoes may have killed as many as 100 people across five counties.

Sarah Bierman said she is worried about the safety of her husband who works at the center, after not hearing from him since the incident.

“I talked to him about eight o’clock tonight, a little before I texted him, and he was returning to the warehouse to drop his van off,” she said to a reporter.

“And I haven’t heard from him since, I just heard through the news and we live in Edwardsville; we lost power. So I decided to come down here to see what was going on, and I had no idea the building looked that bad. And I’m just; I’m worried sick,” she added. 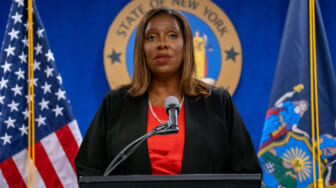 Fillback said the local fire department, with help from local construction companies, is working on clearing out the debris.

“My prayers are with the people of Edwardsville tonight, and I’ve reached out to the mayor to provide any needed state resources,” said Illinois Gov. J.B. Pritzker on his Twitter on Friday.

“Our @ILStatePolice and @ReadyIllinois are both coordinating closely with local officials and I will continue to monitor the situation.”