EXCLUSIVE: Sheila Cherfilus-McCormick’s election will be on Jan. 11 in a safely democratic district where she could possibly succeed the late Congressman Alcee Hastings

One seat remains vacant in the U.S. House of Representatives after the passing of former Congressman Alcee Hastings. Democrat Sheila Cherfilus-McCormick, the Democratic nominee for the open seat, is vying to replace the late 84-year-old lawmaker who served for nearly 30 years in Congress.

On Jan. 11, 2022, Cherfilus-McCormick will compete in a special election to represent the Sunny State’s 20th congressional district in Washington. The attorney and entrepreneur is originally from New York, but moved to Florida at age 13 with her parents — two immigrants from the Caribbean island of Haiti.

After graduating from Howard University for her undergraduate studies and St. Thomas University for law school, she served as the CEO of Trinity Health. In 2018, Cherfilus-McCormick launched her first run for Congress against the late Rep. Hastings and was defeated by a margin of 73.6% to 26.4%. She performed better during her second attempt to win the seat in 2020 but was still ultimately defeated by a margin of 69.3% to 30.7%.

Following Hastings’ death, Cherfilus-McCormick narrowly defeated a crowded field to secure the Democratic nomination — all but securing her a seat in the majority-Black and Democratic district. Ahead of next month’s special election, theGrio contributor Wen-kuni Ceant chatted with the congressional hopeful to learn more about who she is and how her background as a Haitian-American and HBCU alum informs her personhood and politics.

This interview was edited for brevity and flow. 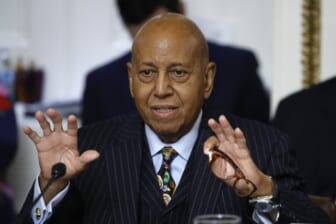 Also Read:
Who was Congressman Alcee Hastings, and what did his legacy teach us?

Wen-kuni Ceant (theGrio): So many people are deterred once they experience a loss or a setback. You have run for this congressional seat before. Speak to your first two times running and what you learned from those experiences.

Sheila Cherfilus-McCormick: I wanted to be an attorney, but my journey put me in a different space and I ended up going into business after. Running for this particular position was a calling — as I was going to D.C. for different healthcare gigs, and lobbying I started to realize this wasn’t beyond me. The first time I ran and lost I was sad, but I was OK. The second time crushed me — I swore I would never run again. Then we found out Congressman Hastings passed but I still didn’t want to run. But you can never avoid your calling. So after hearing a story about how a nurse’s son at my daughters dentist passed away due to lack of healthcare resources, I was compelled to run again.

WC: For those who don’t know you, tell us, who is Sheila Cherfilus-McCormick?

SCM: I’m a mom, I’m a wife, I’m a healthcare executive, but altogether I am someone who has been called to help the district move forward. I’ve been very successful in business with my company, we have been tailoring our organization to be helpful within the community. We have seen the economic downturn as a result of COVID-19, but we have opportunities to get real results in our district.

WC: Tell me more about Sheila the person, the mother, the wife, the Howard graduate?

SCM: I went to Howard University, my parents are from Haiti, we moved from New York to Florida. That’s where the trajectory of my life changed, being in Florida in my district. I found comfort at Howard University — both my husband and I went. We are a huge alumni family. Now we are trying to force our kids — although I think that they are rejecting that a bit. But my money is going to Howard, I don’t know where they are going but I know where my money is going. Faith has been the root of my path — every generation has the opportunity to impact this world and country and we all need to take it seriously and figure out what that impact is.

WC: As a young person, being out on the scene both personally and professionally I have always said that I want to be myself in the truest sense. So that has been a hard balance sometimes being the CEO and co-founder of Politicking but still being true to myself and understanding that I like Carnival, you might catch me in Trinidad or Haiti — so I think it is important to see people in settings where they are very successful but also able to be themselves and not code switch for White or other audiences.

SCM: You are absolutely right, from my generation — I am 42, so for me you grow up looking at The Cosby [Show] or A Different World but we were not yet in a generation that we could be proud of who we are and we can be accepted for being who we are. When I ran [for office] my husband told me, “You just need to be yourself.” When I look at my children, they live in a world where they recognize they should be able to be themselves and they can be proud of that. So public service is a great space to serve in where I can be myself.

WC: The Haitian community as a whole is generally very conservative — and I think that’s OK. It helps folks to realize that Black people are not a monolith and neither are Haitian people.

SCM: As a candidate running, they always try to paint me as one person — sometimes as a crazy progressive. Do I have and believe in progressive policies? Sure, but fundamentally I think we need to stop labeling people and instead get to know them as a person. The party isn’t as divided as people perceive it to be and once people begin to focus on issues, they can better realize that.

WC: So what’s next? How does everything go from here past Jan. 11?

SCM So because it’s a special election … we are sworn in soon after and then we go into another election in August 2022. We saw a huge movement of Haitian-Americans going out to vote. We live in a district that has a large population of Haitian-Americans and Caribbean Americans alike … so we finally saw large populations of them going to the ballots to write and define their own narrative. So if we talk about this election and what really tipped the scale was Haitians witnessing the heinous treatment at the border and the usage of Title 42 to keep Haitians and other immigrants outside of the country. People wanted someone who was willing to fight for change and economic empowerment. There were 11 people running for this seat.

WC: So you were willing to mobilize voters in a super crowded field. And if you win on Jan. 11, I believe you are going to be the only Haitian-American in Congress. That’s a huge responsibility. Can you tell me about some of your policies and priorities for Haiti and Haitian Americans? 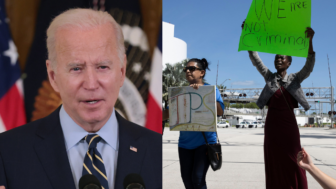 SCM: The biggest thing is to make sure that within Congress the Haitian community has a voice. There has been a lot of issues of [instability] in Haiti. What we are asking for is to aid Haiti in getting a resolution and to stabilize the country. The Haitian elected officials in the nation realized that without a voice in Congress there is a lack of representation. Haiti is a security interest to the United States and Haiti has been a great ally to the United States. Whatever money is going into Haiti we need to ensure that we are using Haitian and Haitian American companies to do the work. This is first time we will have a Democratic Haitian American in Congress. (Mia Love was the first out of Utah and she was a Republican.)

WC: I’m happy to hear about these policy priorities for Haiti.

SCM: This is also historical because it will be the first woman representative in this seat, which is important because this district is 60% women. We took regular women who weren’t political and broke that system with people from the outside — which made this one of the biggest upsets ever. But when the people speak, they speak — and that is really the story of our district. As this is your district too and I trust you’ll tell that story.