DOJ may formally investigate Tulsa massacre after pressure from activists

Survivors of the 1921 Tulsa Race Massacre and their foundation, Justice for Greenwood, are calling on the Department of Justice (DOJ) to investigate the massacre.

In 2017, the DOJ reopened an investigation into Emmett Till’s murder as part of its Cold Case Initiative and passage of the Emmett Till Unsolved Civil Rights Crime Act (Till Act). The Justice for Greenwood Foundation (J4G) wants the DOJ to use the resources of this initiative to unearth the details of how Tulsa officials handled the massacre’s aftermath.

In November, J4G sent an 84-page letter to the Department of Justice Civil Rights Division which outlined why the Tulsa Race Massacre and the aftermath of the event fit the criteria for a DOJ investigation, and how essential DOJ intervention is to providing closure to the massacre’s survivors and victims, and their descendants.

“They have a moral and legal obligation from our perspective, to open this investigation,” Damario Solomon-Simmons, founder and executive director of J4G, exclusively told theGrio. “This is something that they have the absolute authority to do.”

“We fit specifically squarely within their jurisdiction,” he added. 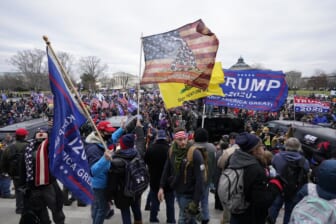 Also Read:
Toughest sentence yet for any Capitol rioter: over 5 years

In a press release, J4G contends the city has failed to conduct a proper investigation and prosecute those involved in the massacre. The organization also referenced a 2020 discovery of unmarked graves of victims and said the discovery underscores why the aftermath would be a key component of a DOJ investigation.

After exhuming 30 coffins found in unmarked graves, the City of Tulsa went against the survivors, descendants and the Tulsa Mass Graves Oversight Committee’s objections and reburied the bodies without delivering an investigative report or allowing for the remains to receive a proper community-led burial ceremony.

“Because they have a conflict of interest, they quickly buried, they literally buried the bodies back and [tried] to just literally cover it up. And we know there are other locations with mass graves,” Solomon-Simmons added.

J4G believes the Department of Justice will act as a neutral, third-party investigator and will provide findings that the survivors, descendants and community can trust.

A spokeswoman for the U.S. Department of Justice confirmed to theGrio that it has received Justice for Greenwood’s formal request for a federal investigation of the Tulsa massacre. The DOJ said it is under review.

This story is based on reporting from theGrio’s April Ryan.