The athlete had been out for several weeks nursing an ankle injury.

An ankle injury may be the reason behind Antonio Brown’s dramatic and unexpected exit from Sunday’s Tampa Bay Buccaneers game.

Brown, who had been out for several weeks nursing the injury, reportedly felt he was not fully recovered enough to return to the game, according to Yahoo. His bizarre, shirtless exit came before Tom Brady led the Bucs on a 28-24 victory over the New York Jets on Sunday.

Brown’s mid-game meltdown came late in the third quarter with Tampa Bay trailing 24-10. He appeared animated while talking to Mike Evans, who tried to calm his teammate. But Brown stripped off his pads, jersey, gloves, and T-shirt — tossing the latter two into the stands — and walked bare-chested down the sideline and into the end zone. He then waved to fans as jogged through the end zone and into the tunnel at MetLife Stadium.

Brown was kicked off the Buccaneers after he walked off the field, Coach Bruce Arians confirmed.

“He is no longer a Buc,” Arians said. “All right? That’s the end of the story. Let’s talk about the guys who went out there and won the game.” 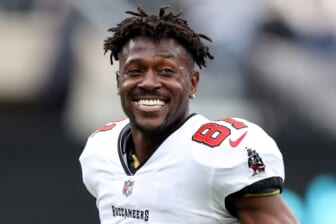 On Monday it was reported that Arians had not immediately heard from Brown or his agent after he walked off the field. He also noted that he has no regrets about signing him.

“I have no regrets, I just hope the best for him,” Arians told reporters following Sunday’s game.

Sports broadcaster Sara Walsh tweeted, “Arians was asked if he could share anything about the conversation he had right before AB left the field: ‘No. Not at all.’ Arians clarified if a player has an injury issue, they go to the trainer and the trainer would tell Bruce they’re out.”

According to NFL Network’s Ian Rapoport, Brown “did not feel he was healthy” enough to continue with the game on Sunday.

“What he told the staff, from what I understand, is that he was not going into the game because, in his mind, he did not feel he was healthy,” Rapoport said. “The response then from the offensive coaches and from Bruce Arians was, ‘If you are not gonna go into the game when we tell you to go into the game, then you cannot be here.’ At that point, they threw him off the sidelines and then cut him from the team.” 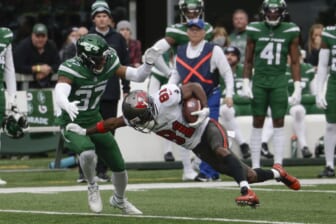 As reported by The AP, Brown was suspended last month for three games for violating the league’s COVID-19 protocols. He also has a history of personal conduct issues and bizarre behavior.

“It’s a difficult situation,” Brown’s teammate Brady said. “Everybody should do what they can to help him in ways that he really needs it. We all love him. We care about him deeply. We want to see him be at his best. Unfortunately, it won’t be with our team. … I think everyone should be very compassionate and empathetic toward some very difficult things that are happening.”