A now-dead suspect has finally been identified by police in the rape and murder of Smith, a 14-year-old Atlanta girl.

A suspect has finally been identified in the rape and murder of a 14-year-old Atlanta girl killed in 1995.

The Atlanta Police Department announced in a live-streamed press conference that they had identified a case suspect who, in August, died of liver and kidney failure in hospice care.

Retired police detective Vince Velasquez said Tuesday that Nacole Smith was walking to school on June 7, 1995 with her sister when she forgot something and turned to go home to retrieve it. Taking a shortcut through the woods, the teen was confronted by a man in the woods who assaulted, raped and shot her. Velasquez said the search for the killer was massive that year, hundreds of witnesses were interviewed, and a DNA profile of him was created.

Velasquez reopened the case on his own in 2002. In 2004, a forensic match was finally identified, and they pursued the suspect through national media, including featuring him through America’s Most Wanted. Velasquez said that upon his retirement in 2017, the case remained unsolved, but advances in technology helped solve it.

In December 2021, the Georgia Bureau of Investigation’s forensics team positively matched the DNA profile to suspects in both cases, and Detective Scott Demeester was able to share the news with Nacole’s family and the killer’s second victim, Betty Brown, who, at 13, managed to escape the woods after her rape years ago.

According to WSB-TV, while investigators declined to release the man’s name, family members of the identified victim said he was 49-year-old Kelvin Arnold, who lived near their home.

“I never imagined this person would be deceased. So many unanswered questions I had for him,” Nacole’s mother, Acquenellia Smith, said. “I’ll live with this pain for the rest of my life. Just take it one day a time. There’s nothing more I can say right now. My feelings are all over the place. There’s not a pill that can take that pain away.” 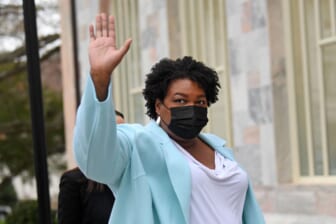 The case was ultimately solved due to Brown’s rape in 2004 in East Point, Georgia. Through DNA, officers linked the crimes together. Brown, the victim in that case at just 13, was also at the press conference.

She spoke directly to Smith’s mother Tuesday, saying, “I’m not okay with the situation on how long it took us to get here, but I’m happy that we are finally here and that he is no longer out there able to do the things that he did to me and Nacole and to others.”

“This is a bittersweet moment,” Brown said of her now-dead attacker. “I’m mad that I didn’t get that opportunity to face him.”