The marshals, Memphis Police, Crime Stoppers and Tennessee Bureau of Investigation have a reward of up to $15,000.

The U.S. Marshals Service, Memphis Police Department, Crime Stoppers and the Tennessee Bureau of Investigation are offering a combined reward of up to $15,000 for information leading to the capture of a Memphis man wanted for the murder of Young Dolph.

Justin Johnson, 23, is suspected of shooting Adolph Robert Thornton, Jr., the beloved rapper shot and killed in his hometown on Nov. 17, 2021, outside Makeda’s Homemade Butter Cookies, a now-boarded, enshrined shop he was known to frequent.

The U.S. Marshals Service released a press release Wednesday stating that Johnson has an outstanding warrant for violation of a federal weapon offense. The marshals are conducting a fugitive search and note that they have been “extensively searching” for Johnson.

According to the press release, Johnson is a Black male with a date of birth of April 10, 1998. He is approximately 5 feet-8 inches tall and weighs about 190 pounds. He has the name “Jaiya” tattooed on his right arm.

The U.S. Marshals say Johnson allegedly has ties to organized criminal gangs and should be considered armed and dangerous.

Young Dolph made his solo debut in 2016 with his album King of Memphis. He continued to release material under his own record label, Paper Route Empire. He achieved his highest-charting success with his seventh album, Rich Slave, peaking at number four on the Billboard 200.

According to previous reporting, Thornton was known as a pillar of the Memphis community. He gained success and recognition as an independent rap artist, and he constantly paid it forward, donating to several local charities, including a $25,000 donation to the athletic department of his alma mater, Hamilton High School. He was scheduled to hand out turkeys at the St. James Missionary Baptist Church in Memphis on Nov. 19, two days after his death. 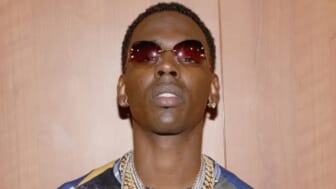 The rapper was laid to rest on Dec. 2 and honored at a public memorial on Dec. 16 attended by rappers Gucci Mane, 2 Chainz and T.I.; all paid tribute to the slain emcee. There was also a tribute from R&B songstress Monica. His children also spoke at the event.

“Since he had [died], I’m gonna make it up to the whole world,” said his son, Tre, “and I’m gonna be the greatest person you’ll ever know.”