Police arrested a man outside of a Doja Cat concert Saturday after reports that the suspect attempted to speed through the entry line by telling nearby concertgoers he was carrying an explosive.

The Indianapolis Metropolitan Police Department (IPMD) tweeted that officers “arrested a man who was trying to get through the security line for AT&T’s Playoff Playlist Live at Momument Circle.”

“Nearby witnesses told police the individual said he had an explosive on him,” the statement continued.

The Indianapolis Star reported the threat was made slightly before 5 p.m. local time, after which police dispersed the surrounding crowd for approximately 20 minutes while investigating the scene. They reportedly found no dangerous items in the man’s possession.

“A fan wanted to advance in line so he exercised very poor judgment and told those around him in line he had a bomb in his backpack,” IPMD Deputy Chief Joshua Barker told IndyStar in a text message. “Someone did the right thing and alerted IMPD. The backpack was clean.”

After debunking the man’s threat, officers arrested him due to unrelated outstanding warrants and kept him in custody, according to the department.

“Police believe there is no active threat and the investigation is ongoing,” the statement continued. “Tonight’s activities and concert for (College Football Playoff) will continue as planned.” 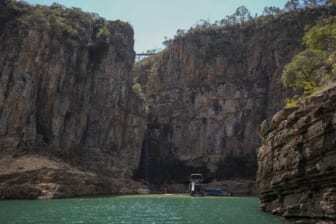 Doja is among the performers on the lineup for AT&T’s Playoff Playlist Live, held in Indianapolis in advance of the College Football Playoff championship game between Georgia and Alabama.

​​In Dec. 2021, the month prior, the platinum-selling rapper had to cancel her performance at iHeartRadio’s Jingle Ball Tour after testing positive for COVID-19 for a second time.

She said she was tested after she was forced to cancel recent shows when members of her production team tested positive for COVID-19.

Earlier in the year, Doja Cat disclosed that she had contracted the virus in July 2020. That announcement came after she had made headlines for downplaying the seriousness of the virus during an Instagram Live session.

“It’s a flu,” she said.  “You just take some Mucinex and drink water and tea and sleep. That’s all you gotta do.”