Out of Africa and onto Vogue: What’s the story behind British Vogue’s February cover?

"It is about the elevation of a continent," says Editor-In-Chief Edward Enninful of the landmark cover celebrating “a new generation of African supermodels”

At first glance, British Vogue’s February cover might seem jarring to some; the shadowy tableau of nine dark-skinned Black women, stone-faced and stiffly posed, almost evokes the feeling of mannequins arranged in a store window. Arguably, this might be exactly its intent: to present Black, dark-skinned beauty and unabashedly African features as aspirational rather than an anomaly—as a standard, rather than a token.

“This is a celebration of women, of matriarchy and of the beauty of Black women,” said photographer Rafael Pavarotti of the milestone. “They are the past, the present, and the future.”

“I saw all these incredible models from across Africa who were just so vivacious and smart,” explained British Vogue’s Editor-in-Chief and European Editorial Director Edward Enninful OBE, himself a dark-skinned British-Ghanaian. “These girls are redefining what it is to be a fashion model.” 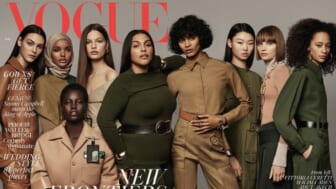 While the shift is undeniably overdue, as we know, change is often hard, particularly for an industry that has long reinforced the marginalization of Black models—and by extension, Black fashion lovers—by simply declaring them not in vogue (pun intended).

“In the beginning, I felt really isolated…I got thrown into the modelling industry very quickly and I kind of had to navigate it on my own,” Yai, who was famously discovered at Howard University’s 2017 Homecoming and has since appeared in campaigns and on catwalks for luxury brands across the world, tells contributing editor Funmi Fetto.

“Backstage, there would maybe be one other Black girl, but now my tribe is backstage,” Yai added. “I can speak my own language to my friends. They are basically like my family.”

Top African supermodel Adut Akech garnered her own alternate cover for the February 2022 issue. Inside, the 22-year-old echoed Yai’s sentiments while reflecting on her own still-growing career.

“I would literally be the only Black, dark-skinned girl in the show. There were no Sudanese models, no African models,” she recalled. “Now, I go to a show and there are girls from my country, girls from Africa who look like me. So yes, there has been a huge change. It has gone from me being the only one at a show to 15 or 20 of us. I’m just so happy that we are finally at this place. I was tired of always feeling out of place and feeling like an outcast.”

The cover undoubtedly marks a triumphant moment, but will the overdue inclusion prove to be just another fashion trend?

“You know, fashion tends to follow waves,” noted Enninful, who also styled the cover. “We’ve had the Brazilian wave. We had the Dutch wave, the Russian wave, the Eastern European wave…And while, in the last decade, the Black model has come to prominence, I love that we are finally giving more space to African beauty.”

The highly stylized looks created for the shoot were intended to exaggerate that beauty, reportedly drawing on influences ranging from the Supremes to the often poised and strategically posed portraits of West African photographers James Barnor and Malick Sidibé. Strikingly, the most direct reference is to Grace Jones’ legendary Nightclubbing album cover, on which the Jamaican-American icon appears almost ebonized as she stares piercingly into photographer Jean-Paul Goude’s lens. 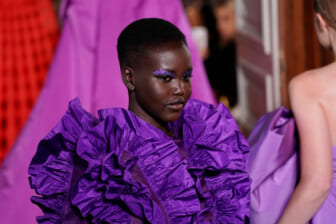 Also Read:
Sudanese model slams magazine for mistaking her for another African model

“African women and their elegance is at the center of this beauty look,” explained make-up artist Ammy Drammeh, who is of Gambian-Spanish descent. “That elegance is innate, you know? They’re not trying, they just are.”

As the rest of the fashion world finally takes notice of that cover-worthy elegance, Enninful asserts that now, “We need to ensure these girls last. We have to invest in them, nurture them and support them with editorial, with advertising, with shows. It has to be 360…Getting these girls and then throwing them away after one season? That has to stop.”

The February issue of British Vogue arrives on newsstands Tuesday, Jan. 18. The full cover story can be read online.