EXCLUSIVE: “It’s time for Black Americans to get our check," said the daughter of Dr. Martin Luther King Jr.

In 1963, Dr. Martin Luther King Jr. delivered his now famous “I Have a Dream” speech to a throng of people surrounding the Reflecting Pool at the Lincoln Memorial waiting to hear the prescription to heal the racial injustice of that time.

In his remarks, King notably characterized the injustice Black Americans faced as a bounced check signed and delivered by the United States government.

“When the architects of our republic wrote the magnificent words of the Constitution and the Declaration of Independence, they were signing a promissory note to which every American was to fall heir. This note was a promise that all men — yes, Black men as well as white men — would be guaranteed the unalienable rights of life, liberty and the pursuit of happiness,” said King.

“It is obvious today that America has defaulted on this promissory note insofar as her citizens of color are concerned. Instead of honoring this sacred obligation, America has given the Negro people a bad check, a check which has come back marked insufficient funds. But we refuse to believe that the bank of justice is bankrupt.”

In an exclusive interview with theGrio, Dr. King’s daughter Bernice King, CEO of The King Center, reflected on her father’s legacy on what would’ve been his 93rd birthday if he were alive today. Recalling her Dr. King’s remarks about the “bank of justice,” Bernice King proclaimed “It’s time for Black Americans to get our check.”

“It will express itself in different ways, maybe some cash payment, but there might be some other provisions made in other areas. But it’s time for Black Americans to be elevated … we have been so mistreated as a race,” she said.

Another civil rights issue that is top of mind in the United States that Dr. King fought so hard to achieve is voting rights. The Voting Rights Act of 1965, which was signed into law by President Lyndon B. Johnson, had taken legal hits since The United States Supreme Court gutted the law in two major decisions dating back to 2013.

This week the U.S. Senate will hold a vote on efforts to restore the protections of the Voting Rights Act and also add more strength to it through additional federal protections. This comes amid modern attacks on voting rights with states like Georgia and Texas, led by Republicans, passing voter suppression laws that will make it harder to vote for Black and minority voters. 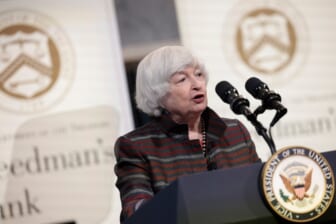 “There are people in rural cities, towns and many of our cities … who this impacts, you know, when polling places close and they have no place to go and they’ve got to drive for distances. It’s reminiscent of the time … back in my father’s time where people had to walk a long way to get to a poll,” said Bernice King. “We have to have protections in place because we can return to that era.”

King, who met with Republican leaders a few weeks ago, said she isn’t buying the GOP’s argument that the nation has moved passed the times of Jim Crow and as a result there is no longer a need for federal voting rights protections to prevent racial discrimination or voter disenfranchisement.

“The notion is that we’ve passed those time periods .. and I beg to differ,” said King. “We could just look at the legislation that was passed in Georgia and some of the other places. I mean, when you have provisions that allow elected officials, the state legislature in particular, who can step in and decide that there’s some issues here [and] so we’re going to overturn the results. What we’ve now become is not a democracy.”

King said now is the time more than ever to return to her father’s mission of creating a “beloved community.”

“My father was really devoted to moving us in that direction and he clearly saw that some things had to change in our mindset, in our actions, that we had to have this revolution of values in this country. We’re still at the place where we need that revolution of values, where we elevate a democracy, we elevate people,” she said.

“I’m concerned that we’ve lost our way as a nation and we need this shift in the priorities so that we can create [a] just humane, equitable and peaceful world … if he were here, he’d be disappointed that we didn’t take his advice.”

Martin Luther King III, the son and namesake of the civil rights leader, has also waged in the fight for voting rights. The eldest son of Dr. King has been leading protests across the country leading up to MLK Day calling on Congress to pass the Freedom to Vote and John Lewis Voting Rights Acts. 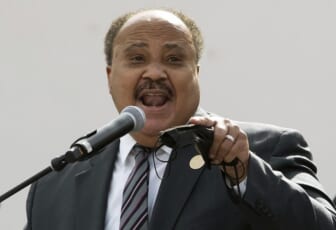 “There is no better way to honor my father’s legacy than protecting the right to vote for all Americans,” King III, who is chairman of the Drum Major Institute, said in a public statement. “The King holiday is historically a day of service, and we hope the United States Senate will serve our democracy by passing the Freedom to Vote Act and the John Lewis Voting Rights Advancement Act. We applaud Senator Schumer for his commitment to expanding voting rights, but we won’t halt our plans for action until legislation has been signed.”

In a tweet, King echoed that message: “Until our freedom to vote is secured, we won’t see progress on the issues that matter most to us — abortion access, gun violence prevention, economic equality, racial justice, climate change. President Biden and Congress: do what’s right and pass voting rights legislation NOW.”