Dequasie Little was taken into custody in the nearby suburb of Decatur less than 24 hours after Grayson Fleming's killing.

A 6-month-old baby was shot and killed Monday afternoon after he and his family were caught in the crossfire of a shootout between two people.

According to reports, little Grayson Fleming and his kin were not the intended targets.

The shooting happened on Monday afternoon on Anderson Avenue in Atlanta, according to NBC News. Police Chief Rodney Bryant said the baby was taken to Grady Memorial Hospital, where he was pronounced dead.

Dequasie Little, 22, was taken into custody in the nearby suburb of Decatur less than 24 hours after the shooting. He is being held on suspicion of murder and aggravated assault. Little has a history of violence, including charges of assault, strangulation and battery, news reports indicate.

“Right now our personnel are down consoling the mother of this child,” said Bryant. “This one hurts, for a six-month-old to be riding down the street and become victim to gun violence — random gun violence between two people who can’t resolve a simple issue.” 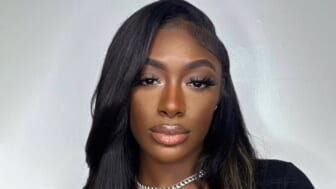 Andre Dickens, the newly inaugurated mayor of Atlanta, addressed the city’s gun violence, which has led to the deaths of three children under the age of six so far in 2022. “These children are bearing the burden and the pain of adults who are choosing to use guns to solve disputes,” he said. “The children are bearing this burden with their lives. And I’m here to ask and to demand that it stop right now.”

“Every child in this city is our own,” Dickens declared.

In the two other incidents, a mother was arrested following the death of her 1-year-old daughter three days after the girl was shot by another young child who’d discovered an unsecured gun. In the second, a 5-year-old child was the victim of others’ crossfire.

Atlanta’s police chief also added his dismay at the killing of an infant.

“I’m mad as hell that the incident occurred in the first place,” Bryant said. “We are seeing too many instances where people don’t know how to resolve a conflict. When the mayor and I were able to talk to the mother of this child, we were speechless. What can you say to a mother that’s lost a child — to nonsense? To nonsense.”

Governor Brian Kemp shared his sentiments on Twitter, where he wrote, “Our hearts are broken for the loss of this innocent child. We mourn this unfathomable tragedy tonight with the family. Please join us in keeping them in your hearts & prayers. This kind of lawlessness must end, & these criminals must be held accountable.”