Minneapolis police insisted on changing the warrant to "no-knock" before conducting the deadly search, KARE 11 reports

Before fatally shooting Amir Locke in his apartment, the Minneapolis police unit called upon to execute the search warrant refused unless they were authorized to enter without knocking, reported NBC-affiliated KARE 11 on Friday.

After the 22-year-old Black man was shot on Wednesday by SWAT team officers while they executed a search warrant, on which Locke was not named, authorities later revealed the warrant didn’t initially permit a “no-knock” entrance.

“St. Paul police originally did not request a no-knock warrant from a judge, but when Minneapolis police were asked to execute the warrant, MPD insisted the warrant be changed to authorize it be executed without first knocking,” per KARE 11 Investigative Reporter A.J. Lagoe.

On Friday, attorneys representing Locke’s family called the decision “inexplicable” and pointed out a pattern of “‘no-knock” warrants resulting in police violence against Black people.

“This inexplicable, yet deliberate choice needlessly ended Amir’s life,” wrote civil rights attorneys Ben Crump and Jeff Storms in a joint statement, per KARE 11. “It’s past time that the Minneapolis PD be transparent and accountable to Amir’s family and the community that they are sworn to protect.”

“No-knock raids at the hands of law enforcement continue to take the lives of innocent Black people,” the attorneys added. “We ask that just as people raised their voices for Breonna Taylor, they do the same for Amir Locke. Enough is enough.”

Amelia Huffman, interim chief of the Minneapolis Police Department, said during a press conference on Thursday that “both a no-knock and a knock search warrant were obtained… so the SWAT team could assess the circumstances and make the best possible decision.”

During the press conference, which also featured Minneapolis Mayor Jacob Frey, Huffman’s comments were cut short by Nekima Levy Armstrong, a local civil rights attorney who stepped in to call out the department for making “excuses.”

“This is what I would call the anatomy of a cover-up. This is unacceptable,” said Levy Armstrong, who co-chairs the city’s Commission on Community Safety. “When I agreed to work with you on the work group, we talked about the importance of transparency and accountability. And here what we are seeing is business as usual.”

“I don’t know how you guys slept that night. I couldn’t sleep at night,” Levy Armstrong continued, adding that she wept “tears from a mother’s perspective thinking about what happened.” 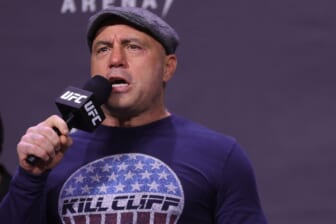 According to the Associated Press, body camera footage of the incident released Thursday showed an officer entering Locke’s unit using a key, “followed by at least four officers in uniform and protective vests’ who repeatedly yelled “Police, search warrant!” “Hands!” and “Get on the ground!”

“The video shows an officer kick a sectional sofa, and Locke begins to emerge from under a blanket, holding a pistol. Three shots are heard, and the video ends,” per the AP. “The city also released a still from the video showing Locke holding the gun, his trigger finger laid aside the barrel. The top of Locke’s head is barely visible.”

On Thuesday, Levy Armstrong said to the interim chief: “Amelia, you’re saying you want to be the chief, then act like it. Demonstrate integrity, don’t cover up for what those cops did.”

“If they knew that the kid had a gun as he started waking up, say ‘Drop your weapon,’” she continued. “They didn’t do that. One cop opened fire and took the life of a child who was trying to go back in his blanket. Any mom can see what happened there. So I can’t tolerate the whitewashing, I’m sorry y’all.”

According to Newsweek, Frey, who was also mayor when the city saw George Floyd murdered at the hands of police in 2020, has issued a temporary moratorium on all “no-knock” search warrants following Locke’s death.