Alabama welcomes visitors at the “First White House of the Confederacy,” a historic home next to the state Capitol where Confederate President Jefferson Davis lived with his family in the early months of the Civil War.

The museum managed by the state’s Department of Finance says it hosts nearly 100,000 people a year, many of them school children on field trips to see such things as the “relic room” where Davis’ slippers and pocket watch are preserved. Near the gift shop, a framed article describes Davis as an American patriot who accomplished “one of the most amazing feats in history” by keeping the “north at bay for four long years.”

Evelyn England, an African-American woman, worked for 12 years as a receptionist at the historic site, said some visitors, both Black and white, were surprised to see her there. 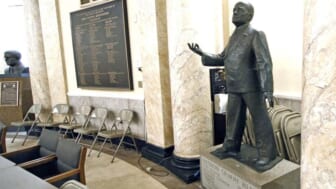 England, 62, retired this week from the $34,700 state job, and it wasn’t the friendliest of departures: State records show she was suspended for three days last month for refusing to sign a performance review, and she said she filed a racial discrimination complaint with the U.S. Equal Employment Opportunity Commission. A spokeswoman said the Department of Finance declined to comment on the personnel matter.

After all those years working among the Davis family’s furniture and belongings, England wishes the museum would take a broader view of history. That slavery was a catalyst for the Civil War “is sort of stated around,” she said.

“Tell it like it is. Just tell it like it is. This happened. This is what is known to have happened. Give it as absolute truth as you can….. Until that, you are painting a false narrative that this was a gala — no, there were some ugly things that happened,” she said.

Explanatory displays at the museum, where the first Confederate flag still flies outside, mostly discuss the furnishings and how rooms were used, and make little to no mention of slavery, which Davis promoted as “a moral, a social and a political blessing.”

The residence was salvaged over a century ago by The White House Association, a state-chartered women’s organization that still owns its contents and remains involved, even as Finance Department employees staff the site. The legislature mandated in a 1923 law that the state-owned building serve as a “reminder for all time of how pure and great were southern statesmen and southern valor.”

It would be better, England believes, if the historic site was managed by the Department of Archives and History.

The museum’s curator, Bob Wieland, said Friday that he would ask the board to respond to questions about how the museum is run, but he doesn’t think the museum depicts an overly rosy view of Davis. 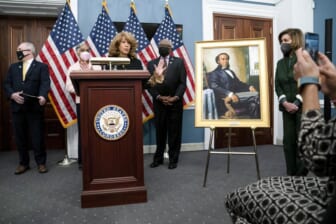 Also Read:
First Black Congressman, who was born a slave, honored at Capitol

“Jefferson Davis has never been called great in the house. He was the president of the Confederate States of America. We would say no more, no less than that,” Wieland said.

England, who would sometimes give tours, said guides only gave information such as the dates (February-May 1861) when Montgomery served as the Confederacy’s capital.

The museum has made some changes over the years. She said there once was an area called a “shrine” to Davis. The gift shop stopped selling Confederate flags, except for stickers of the design that was used when the Confederate capital was in Montgomery.

“They have taken steps. It might be baby steps,” she said.

England, who lives in Marion, said she is a distant cousin of Jimmie Lee Jackson, a civil rights activist shot and killed by a state trooper in 1965. His death helped inspire the voting rights marches from Selma to Montgomery that led to passage of the Voting Rights Act. England was a young child at the time, but still recalls the commotion and pain.

In conversations with visitors, England said she would sometimes use questions and humor to try to get them to see a different point of view.

When one person maintained that secession was only about preserving states’ rights — a view that had long been taught to southerners as the root cause of the Civil War instead of slavery — she responded, “But did everyone have the same rights?”

“You love the Confederacy for what you think it stood for: Your rights,” she would think. “What were they fighting about? Some would say states’ rights. I have a problem with your solution of states’ rights because all individuals in that state didn’t have the same rights.”

One day, an older white woman said “Oh, the South will rise!” to no one in particular as she browsed in the gift shop, where the merchandise includes books, stickers of the first Confederate flag and children’s toys including teddy bears in Confederate and Union uniforms. When the woman turned around to put more items on the counter, England asked her, “What are you rising from?”

She said the woman didn’t reply. “If looks could kill I’d be a dead woman,” England said.

But many interactions have been positive, she said, recalling good conversations, even with people who — a supervisor warned — could be prejudiced against her.

She’s been “chewed out” by some African Americans for working there, she added. “It came at me from both sides,” she said.

Many visitors — Black and white — found her race a point of curiosity.

“How do you work here?” one white woman asked her.

“Ma’am, if you pay every last one of my bills, I’ll quit today,” she jokingly replied.

“Just open up what you are thinking. That’s where the real change is going to occur, in your heart. You can take down monuments. But if what they are still harboring is there, at an inopportune time it will resurface.”