"She's free to do her social media posts as she has done in the past," an NBC Sports spokesman said of Jones Monday.

Former Saturday Night Live star Leslie Jones has delighted fans with her live tweets of the Olympics since 2016. An avid devotee herself, the comedienne live-tweeted the Rio de Janeiro Summer Olympics in 2016, and was invited to contribute to NBC’s coverage of the 2018 Winter Olympic Games in Pyeongchang, South Korea, which she attended in person.

But on Sunday, Jones shared that she may stop live-tweeting about the current Beijing Winter Games, saying her content is being blocked on social media and can’t be shared.

Jones said she’s “tired of fighting the folks who don’t want me to do it.”

“They block my videos and they get folks who think they can do it like me. And I’m tired of fighting them,” Jones wrote Sunday on Twitter and Instagram. “I love the athletes and they love me doing it. And I know y’all love it. But now it’s just gotten too hard. And no one is fighting for or with me. Soooo I guess I’ll leave it to the professionals. But thank you for all the love.”

Fans instantly responded to Jones’ posts. “Your commentary and live tweets are a DELIGHT!! They are, in fact, the only thing that makes me want to go and watch @nbc’s actual coverage of the Olympics,” one wrote. “Your wonder at these athletes’ achievements is so genuine, joyous, and infectious. They should be PAYING, not punishing!” She retweeted this message and several others.

In response, NBC officials told The New York Times they didn’t take down Jones’ videos. “She’s free to do her social media posts as she has done in the past,” a spokesman for NBC Sports said Monday night. “She’s a super fan of the Olympics, and we’re super fans of hers.”

They contend the situation between Jones and the network “has been resolved.” 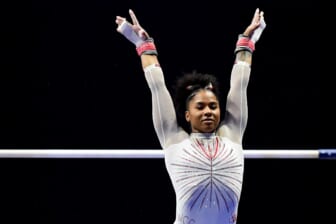 Earlier in the week, Jones implied that NBC was looking to replace her. “I have watched olympics since I could walk lol. Me and my dad. So this is from my heart. Y’all should be asking @NBCSports why they don’t see that. And think they can replace me with just anyone. Again not saying I was first just saying it’s frustrating. @TeamUSA,” she wrote on Twitter.

In the commentary of the video she shared in the tweet, Jones stated: “I do this because I really love watching the Olympics. When I first started doing this in Rio, I did this because people were telling me that no one watches the Olympics, and I was like, ‘Are you f— crazy?’” she wrote. “These are athletes, this is like everybody coming together no matter like what’s going on and competing in the games… For us, as a country not supporting this, I thought that was just absolutely stupid.”

Viewers of the Winter Games in China continue to offer the comedienne support. One tweeted, “I never miss the Olympics either. It’s sad coverage many events are on paying platforms instead of network. I wish I had found you prior to these Olympic Games, you bring sparkle and fun to an already awe inspiring occasion. Thank you!”