The Secret Service and the FBI are investigating the incident, which happened the same day Spelman College reported another bomb threat of its own.

The Secret Service said this is an ongoing investigation but emphasized that there’s nothing to indicate that the threat was directed against Mr. Emhoff or the White House. The Secret Service is working with the FBI as they investigate the incident.

According to press pool reports, the husband of Vice President Kamala Harris was “ushered out” at 2:15 p.m. local time. The event was Emhoff’s first public Black History Month event.

A White House source contends that Emhoff was involved in other celebrations this month. Tuesday’s appearance was in partnership with the high school and National Park Service and was previously planned with a pool of White House reporters following the second gentleman for the event.

Dunbar High School is a historically Black school and is the nation’s first public high school for Black students. It has attracted prominent figures to the school over the years, including musical icon Stevie Wonder.

Details of the event with the second gentleman came from the pool report from Spectrum News as follows:

“SGOTUS was ushered out of the room at 2:18 p.m. by a Secret Service agent. The agent said something like, “We have to go.” Dunbar’s principal followed a few minutes later,” read the pool report.

SGOTUS staff informed the pool there was a security threat reported by the school to secret service. They did not give pool any more information.

A school announcement came over the intercom at 2:34 calling on teachers to evacuate the school and pool left the building as well.

Black History Month has been a focus of the White House as the Biden-Harris administration recognizes the importance of not just the contributions of Black Americans but also the power of the Black vote, which has been and will be pivotal in their continued White House efforts. 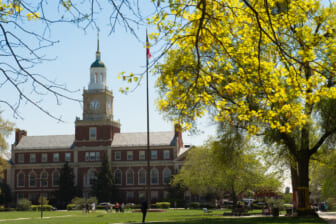 As a precaution, if anything is reported to authorities in the downtown D.C. area it is followed by heightened security around the perimeter of the White House. During the time of the bomb scare at Dunbar High School, the streets surrounding the White House were shut down.

Meanwhile, another bomb threat was reported Tuesday in Atlanta at another Black learning institution. Spelman College, the top HBCU in the country, tweeted Tuesday afternoon: “The campus was on lockdown for four hours while officials completed a thorough sweep of the campus. Classes are canceled for today and the campus is closed to visitors.”

As threats continue to hit HBCU campuses across the country, the Southern Poverty Law Center held a national roundtable Tuesday that included government leaders and several presidents from HBCUs to discuss the security issue.

“The timing of these threats coinciding with the first day of Black History Month was likely an attempt to exploit tensions amongst some factions of our society. The threats that we witnessed last week and throughout the month of January and even now we’re hearing that there’s some other threats.”

She emphasized, “These threats are reminiscent of the civil rights era bomb threats against Black people is an unfortunate part of American history.”

Cooper acknowledged that the White House is concerned about the rash of bomb threats, adding, “The FBI Joint Terrorism Task Force are leading the investigation into these nationwide bomb threats. And these investigations are being given the highest priority.”

Early reports have revealed six juvenilles are a focus of the investigation of bomb threats made against several HBCUs.

The president of Edward Waters College, Dr. A. Zachary Faison, said,“This is rooted in many respects out of ignorance and not necessarily in a pejorative sense but in the literal sense that our young people are not being exposed to history and not being exposed to the truth. I certainly am hopeful that we won’t see a softening of whatever kind of response that there might be if, in fact, they are found to have been guilty of this heinous crime.” 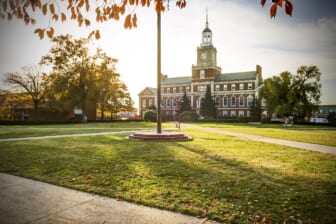 Alcorn State University President, Dr. Felecia Nave, said her students “are traumatized but…they’re resilient, and they are resolved to continue to move forward and to make it known that we won’t be threatened, we won’t be scared away that we will continue to contribute to society in a greater sense.”

In addition, Dr. Cooper said “The White House Initiative on HBCUs is also coordinating a government wide approach, they convened a campus safety and resiliency cluster, led by the Department of Justice and the Department of Homeland security.”

Each threat is being taken seriously, however, there is a concern from authorities in D.C. that many of these bomb threats are copy cat in nature.