"There were 500 people in that room, and nobody noticed what was going on," Leidy Lyons' mother told KBJR of Sunday's disqualification threat.

A 12-year-old girl came close to being disqualified from a swim meet in Wisconsin Sunday for wearing a swimsuit emblazoned with the words “Black Lives Matter.”

Leidy Lyons was all set to compete in a USA Swimming meet held at Superior High School and sponsored by the Duluth Area Family YMCA in Duluth, Minnesota, just over 4 miles north of Superior, Wisconsin. One race official, an independent volunteer, told the pre-teen that her swimsuit violated league policy against political language, and she would be disqualified if she didn’t change into another suit.

Lyons’ mother, Sarah, told KBJR that her daughter “is very passionate about social justice. She has been through a lot already at a young age. It’s a big part of her, which I think is wild at 12.” Lyons reportedly chose to wear the suit in response to the police killing of 22-year-old Amir Locke last week in Minneapolis.

According to local reporting, after refusing to change swimsuits, the young athlete was barred from participating in the Northern Sectional swim meet — albeit temporarily. Leidy’s mother immediately called the Duluth NAACP, whose chapter president, Classie Dudley, came to the meet to help rectify the situation.

According to a report from Local News 8, the volunteer’s ruling was overturned on the spot by YMCA officials, and Lyons was allowed to compete. Additionally, with support from the Duluth NAACP, the unidentified person was banned from future swim meets hosted by the Duluth YMCA.

“The Duluth YMCA is saddened that the student, their family and teammates had to endure this unacceptable behavior. The Duluth YMCA will continue our ongoing commitment to train all staff and volunteers on diversity, equity and inclusion,” the organization said in a statement.

“The Duluth Area Family YMCA is committed to being an anti-racist organization and stands with BIPOC communities throughout the Northland and throughout our country,” the statement continued. “We know that Black Lives Matter and we will continue to work to educate ourselves, to stand against inequality, and to strive to be active allies in the ongoing fight for diversity, equity and inclusion.”

Dudley noted she was “incredibly proud of Leidy through this situation.” 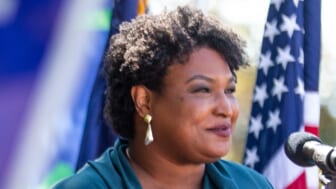 “She had the opportunity to change, the official had said she could change and continue to compete,” Dudley said. “And at 12 years old, she decided no, I’m going to stand up for what’s right, and that’s exactly what she did.”

“There were 500 people in that room, and nobody noticed what was going on,” Lyons told KBJR. “It is a really good example of what is actual allyship and what is performative allyship in those moments when people need you to stand up, even if it’s not in your best interest.”