Black was spotted using a walker to leave a California hospital on Monday less than three days after reportedly getting shot in the leg.

Hip-hop star Kodak Black was spotted using a walker to leave a California hospital on Monday less than three days after reportedly getting shot in the leg.

TMZ’s cameras were rolling Monday afternoon when the 24-year-old Florida lyricist, whose government name is Bill Kapri, was about to hop in an SUV after being released from Cedars-Sinai Medical Center in Los Angeles, the news site reported. 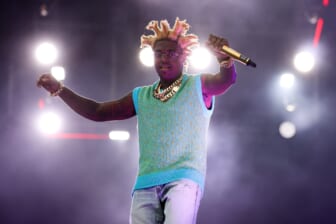 Black was surrounded by bodyguards as he prepared to enter his vehicle. TMZ said the “ZEZE” rapper was enjoying Super Bowl LVI festivities in LA over the weekend before becoming a shooting victim.

Four people were shot early Saturday morning during a melee that unfolded outside The Nice Guy restaurant in West Hollywood, according to a Los Angeles Police Department press release.

The fight erupted following a Justin Bieber event taking place at the venue. Video footage of the scuffle showed Black jumping into the fray to help a friend just before shots rang out, per TMZ.

No arrests were made on Saturday, police said. Investigators were still looking for the gunman Tuesday morning, an LAPD spokesperson told theGrio.

Black didn’t address the media on Monday as he was leaving the hospital. His latest album Back For Everything is scheduled to drop on Feb. 25.