Kweli and Yasiin Bey announced in 2018 that they have been recording the follow-up to their 1998 debut, 'Mos Def & Talib Kweli Are Black Star.'

Talib Kweli gave fans some hope that a new Black Star album may be on the way. The rapper took to social media to tease that he and Black Star duo mate Yasiin Bey, formerly known as Mos Def, will be releasing their long-awaited sophomore album sooner than later.

Kweli posted a photo of himself and Bey inside of a hotel room to his Instagram page on Sunday. It included the caption “The new Black Star album was recorded in hotel rooms and dressing rooms across the globe.” He continued by commending Bey for inspiring him during the recording process. “I love how my brother @yasiinbey pushes me musically.” 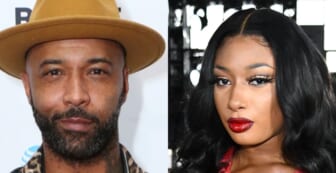 The “Get By” rapper ended the post by telling fans to follow the duo at their official Black Star Instagram page, @blackstarkeepshining. The page currently has over 51,000 followers.

Kweli and Bey had previously announced back in 2018 that a Black Star was in the works, and that production would be handled exclusively by Madlib, NME reported. The following year, Kweli stated that the album was “done.” However, by 2020, the album still had not been released. Kweli stated “interlopers and culture vultures” were keeping it from being released, blaming managers and lawyers.”

“I want to see this come out as bad as y’all do, or more,” Kweli said. “But people who never made a beat, never wrote a rhyme in their life got their fingers in the pie and are being disrespectful to what me and my brothers built.”

The two Brooklyn MCs first linked up to record and release their debut and currently their only album, Mos Def & Talib Kweli Are Black Star in 1998. The album boasted much social and political awareness and subtext lyrically, becoming a critically acclaimed project.

Despite only recording one full-length album, the two have toured together a lot over the next two decades following the album. In addition, they have recorded together occasionally throughout the years on each other’s solo albums from songs like “Joy,” from Kweli’s 2002 album, Quality, and “History” from Bey’s 2009 album, The Ecstatic.

In 2021, both Kweli and Bey teamed up with comedian Dave Chappelle to co-host the Luminary podcast series, The Midnight Miracle.