What is going on with the officials who didn’t arrest or charge Ahmaud Arbery’s killers?

The Georgia Attorney General says his goal is to "ensure maximum justice for Ahmaud, his family, the community, our state and our nation."

The Georgia Bureau of Investigation has completed its investigation into the actions of a district attorney who may have engaged in “prosecutorial misconduct” in the Ahmaud Arbery case, the GBI confirmed to theGrio on Tuesday.

The Georgia attorney general’s office, in May 2020, asked the GBI to investigate whether Waycross Judicial Circuit District Attorney George Barnhill‘s actions in the Arbery case amounted to prosecutorial misconduct.

“The GBI has completed the investigation and given it to the AG’s office,” Nelly Miles, a bureau spokesperson, said in an email.

The state attorney general’s office noted that Barnhill did not disclose a potential conflict of interest after he was appointed to investigate Arbery’s death that has now been ruled murder.

In a statement to TheGrio on Tuesday night, Georgia AG Chris Carr said: “As we mark two years since the murder of Ahmaud Arbery, our office remains committed to a complete and transparent investigation of how this case was handled from the outset. While an indictment has been returned and we prepare for notice of an arraignment, our file is not closed and our full investigation continues. Our goal is to ensure maximum justice for Ahmaud, his family, the community, our state and our nation, and we will leave no stone unturned in our pursuit of the truth.”

The indictment referenced in Carr’s statement refers to former Brunswick Judicial Circuit District Attorney Jackie Johnson, who was also a target of the GBI probe.

Barnhill’s office declined to comment on the conclusion of the investigation into his behavior. When contacted, an unidentified person at Barnhill’s office said, “Sir, our office did not handle that case and have no comments.” She then hung up. When called back, she said she wouldn’t give her name and hung up again.

The Barnhill investigation and its results remain one of the last pieces of potential prosecution in the Arbery case. The AG asked the GBI to investigate Barnhill and Johnson.

A grand jury indicted Johnson last September for a violation of the oath of a public officer and for obstruction and hindering a law enforcement officer. The obstruction charge note:

“On or about February 23, 2020, (Johnson) did knowingly and willfully hinder Stephanie Oliver and Stephan Lowrey, law enforcement officers with Glynn County Police Department, in the lawful discharge of their official duties by directing that Travis McMichael should not be placed under arrest, contrary to the laws of said State …”

The controversy and subsequent investigation stem from Johnson’s, and then Barnhill’s, handling of the Arbery case. 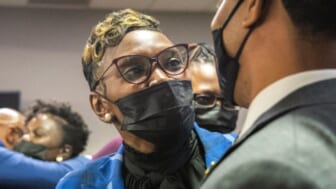 Johnson conducted the initial investigation into the shooting. She asked for Barnhill’s help. He talked to the Glynn County police officers investigating the case and came to the initial conclusion that the suspects at the time did not commit a crime.

Johnson recused herself within days of Arbery’s death because now-convicted murderer Gregory McMichael, a retired police officer, once worked in her office as an investigator. McMichael even called Johnson after the shooting, the AJC reported.

Johnson didn’t notify the state’s AG office of her conflict until after Barnhill met with police and submitted his initial finding. Johnson, according to the indictment, recommended to the Attorney General’s Office that Barnhill take over the investigation. Johnson did not disclose that Barnhill assisted her before taking over the case. The indictment uses that example of Barnhill’s involvement to note Johnson failed “to treat Ahmaud Arbery and his family fairly and with dignity.”

Barnhill had a possible conflict of his own that he didn’t disclose. Barnhill, under pressure from the Arbery family,  had to recuse himself because Barnhill’s son works as an assistant district attorney in the Brunswick District attorney’s office — and had, at one point, worked with Gregory McMichael. Still, in his recusal letter, Barnhill supported the three men who chased, cornered and killed Arbery.

“It appears Travis McMichael, Greg McMichael, and Bryan William were following, in ‘hot pursuit,’ a burglary suspect, with solid firsthand probable cause, in their neighborhood, and asking/ telling him to stop. It appears their intent was to stop and hold this criminal suspect until law enforcement arrived. Under Georgia Law this is perfectly legal,” Barnhill’s letter stated.

Atlantic Judicial Circuit District Attorney Tom Durden from Liberty County, GA. took over the case. Two months after Arbery’s murder, Durden announced he would convene a grand jury to determine whether the three men should be charged. He also requested that the Georgia Bureau of Investigation probe Arbery’s shooting and death.

Three white men — triggerman Travis McMichael, his father, Gregory McMichael, and William “Roddie” Bryan, who filmed the encounter — have been convicted for murder and hate crimes. All three contended they were chasing Arbery, 25, down a Glynn County street because they believed him to be a burglary suspect.

Arbery was murdered on Feb. 23, 2020, while out for a jog. His death came at the intersection of a troubled police department and two white prosecutors who, records show, supported the killers. 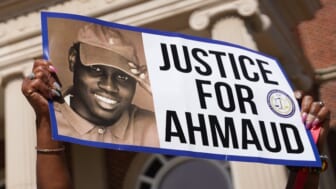 Two Glynn County commissioners told the Atlanta Journal-Constitution that Johnson told police not to arrest the McMichaels. She denied the claim and blamed the failure to arrest on police.

On May 21 the Georgia Bureau of Investigations arrested Bryan, the man who took the video, in connection with Arbery’s killing. Authorities said at the time he helped detain Arbery.

On June 24, 2020 — some four months after his death, and only after pressure from his family — the grand jury indicted the three men.

Then, on Feb. 22, a federal jury found the three men guilty of violating Arbery’s civil rights because he was Black.

The Bar Association wouldn’t answer questions about the letter. “We cannot confirm or deny the existence of a matter unless/until it has been filed at the Supreme Court,” Jennifer R. Mason, the association’s director of communications, said in an email.

“He asserted some invalid legal justifications for the deadly force, alleging self-defense,” Merritt was quoted by BET as saying. “It’s not only absurd, it was evil of him to abuse his positions in that way.”

The GBI has completed its investigation of Barnhill and submitted findings to the state attorney general.

Meanwhile, the case against Johnson appears stalled. Johnson was indicted in September 2021 but has yet to go before a judge or make a court appearance. She remains free on her own recognizance. If convicted, she faces up to five years in prison on the oath of a public officer charge and up to 12 months on the obstruction charge.

Former Glynn County Police Chief John Powell also faced calls to resign over his department’s handling of the Arbery case, but he found himself in hot water over this department’s other problems.

Glynn County fired Powell after he was indicted on a malfeasance charge unrelated to the Arbery case. Authorities allege Powell helped cover up an affair one of his officers had with a confidential informant.