The restaurant, nestled on the lower level of the Smithsonian’s National Museum of African American History and Culture, hosted a chef’s residency program throughout February

The sizzling and spattering of hot oil could be heard from the other side of the kitchen as chef Jaycee Couch laid silver-hued mackerels on a cooking range one by one.  Nearby, the soothing sound of water bubbling in a pot, the comforting sight of chicken thighs turning golden-brown in the deep fryer and the rhythmic beat of a knife slicing through mounds of fresh herbs all combined for a culinary panorama on display at the Sweet Home Café.

The restaurant, nestled on the lower level of the Smithsonian’s National Museum of African American History and Culture, hosted a chef’s residency program throughout February in honor of Black History Month.

Guest chefs were invited to curate menus unique to their culture and background on different weekends, a creative undertaking made possible through a joint venture between Restaurant Associates, which operates Sweet Home Café and several other Smithsonian restaurants, and Thompson Hospitality, the largest minority-owned food service company in the U.S.

“We called this week’s theme Afro-Caribbean,” said Chef Alexandra Strong who, along with Couch, was in charge of creating the dishes that would mark the culmination of the four-week chef’s table.

“My father is from Nigeria and my mother is from Puerto Rico, so I have the best of both worlds, you know. And Jaycee has roots in Nigeria too, so I thought a fusion of the Caribbean side with the West African side would be a great idea for this collaboration.”

They and the other guest chefs cooked for a live audience every Friday of Black History Month, their special menus extending into the weekend.

Strong and Couch’s main dishes such as jerk style chicken with piri piri sauce and mackerel Escovitch with pickled peppers and a cilantro mojo were accompanied by either coconut rice and pigeon peas or South African spiced tri-color carrots and ginger honey-glazed fried plantains.

“On our menu here, we have jerk chicken that’s originally from the Caribbean and we paired it with piri piri sauce that’s actually from West Africa, using scotch bonnet peppers and different herbs and spices to make a blend for those two cultures to come together,” Couch said.

“It’s all different techniques and different backgrounds, but it’s all good food.”

For dessert, Strong proposed a cassava bread pudding, inspired by the yuca cassava she grew up eating.

“I know the big trend now is gluten free and vegan friendly, and I was trying to combine the idea of both a bread pudding and a cassava, and when I started testing the recipe, it was amazing how it all just came together,” Strong said.

Instead of the traditional sugar glaze, Strong opted for a guava glaze to honor her Puerto Rican heritage because guavas were abundantly incorporated in all aspects of her diet.

“We eat guavas with everything. Coffee, cheese, bread. It’s just one of our staples.”

The chef’s residency program marked the return of Sweet Home Café’s annual dining experience, which started in February 2017, after a one-year hiatus due to the COVID-19 pandemic. 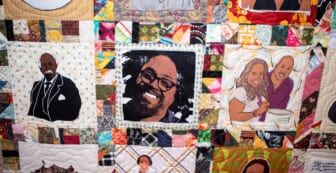 “This cafe is definitely an extension of the museum on every angle, from the food through the hospitality,” Lukas says.

Floor-to-ceiling photographs displayed on the walls of the restaurant show important moments in African American history and culture, such as the 1960 sit-in at a lunch counter at a Woolworth’s store in Greensboro, North Carolina, to protest segregation, to a snapshot of Louis Armstrong’s recipe for rice and beans.

“The cafe complements the very design of this museum. If you start from the lower level, it’s significantly dark and gets progressively lighter as you work your way to the top. The darkness is symbolic because the curation of that floor is a reflection and reminder of all the trauma African Americans have endured,” Coles said.

He called the café “a respite” from the “heavy and emotionally draining” initial exhibits of the start of Black enslavement, allowing visitors to “gather themselves before they go see the other exhibits which are just as important, but perhaps a little more lighthearted.”

“We talk about it all the time – how important the cafe is. There’s no other nationally recognized African American history museum so it’s a unicorn,” Coles said.

“So you’ve got to take good care of it …You are just a steward until the next group comes along, but you want to leave it better than you got it. Everything around us is all living history.” 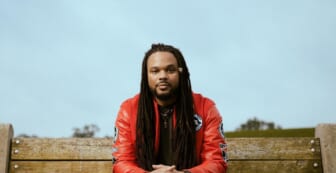 The team behind Sweet Home Café is determined to bring back this chef’s residency program next year as well and to continue its tradition of celebrating Black History Month through food.

“As chefs, it’s important to both Ramin and I to promote the next generation,” Lukas said, “and to give them this wonderful opportunity to showcase their cooking.”

Zoya Mirza covers national security and politics for the Medill News Service. Her work has appeared in USA Today, UPI, The Spokesman-Review, Sojourners and The Grio, amongst others. Her past experiences also include editorial work in book publishing and conducting political analysis for NGOs and think tanks.