Herschel Walker, a Senate candidate, worries a nasty primary between Gov. Brian Kemp and David Perdue could cost Republicans in the November election

Herschel Walker has a message for the Republicans going after each other for their party’s nomination for governor in Georgia: Don’t count on help from me.

A football legend in a sports-crazed state whose Senate campaign is backed by former President Donald Trump, Walker is running far ahead in Georgia’s May primary. That makes his support attractive for incumbent Gov. Brian Kemp and challenger David Perdue, who are in a bruising primary campaign.

For now, Walker is refusing to get involved and is increasingly expressing exasperation with the negative tone of the governor’s race. He is voicing the concerns of many Republicans that a nasty campaign between Kemp and Perdue could leave the GOP divided heading into the November election and potentially cost the party the governorship in a state they have dominated for two decades.

“I don’t support either one of them. I’m mad at both of them,” Walker told a University of North Georgia audience last month, according to audio obtained by The Atlanta Journal-Constitution. He later told nationally syndicated conservative radio hosts Clay Travis and Buck Sexton that “intersquad fighting” was distracting from efforts to unify the party. 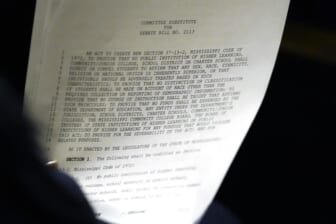 Also Read:
Mississippi House passes bill to set limits on how to teach about race

“I told people I’m upset because we got some strong candidates running,” he said. “We cannot continue to go out there and fight among each other when we got this country that is hurting.”

That anxiety is especially pronounced in Georgia, where Republicans have attributed the loss of two Senate seats in 2021 to party infighting after the 2020 presidential election. Those defeats handed Democrats the Senate majority.

Trump, who narrowly lost Georgia in 2020 and has made the state a centerpiece of his lie that the election was stolen, isn’t doing anything to soothe tensions. He appears to be micromanaging efforts to defeat Kemp, whom he blames for not trying to overturn Biden’s victory in Georgia — something the governor had no power to do.

The former president retaliated by publicly recruiting Perdue, one of the senators defeated in 2021, to run for governor. Trying to clear the way for Perdue, Trump persuaded another loyalist running for governor, Vernon Jones, to exit the field and instead run for a congressional seat with his explicit backing.

The GOP dynamic contrasts with the straightforward alignment on the Democratic side between incumbent Sen. Raphael Warnock and Stacey Abrams, the all-but-certain nominee for governor. The two are longtime political allies. Abrams’ strong backing was a major factor in propelling Warnock to the Senate in 2021, and they are likely to run closely-linked campaigns emphasizing many of the same issues, including Medicaid expansion and protecting voting rights.

A Trump spokesperson did not immediately respond to a request for comment for this story. But his political team has not talked to Walker about endorsing in the governor’s race, according to a person familiar with conversations between the two camps who requested anonymity to discuss internal operations.

Walker has his own problems, including scrutiny on his past threats of violence, his business dealings and his policy positions in the Senate race. But he’s seen as a strong front-runner in the primary in part because of the celebrity he earned after leading the University of Georgia to a national championship following the 1980 season and winning the Heisman Trophy in 1982. 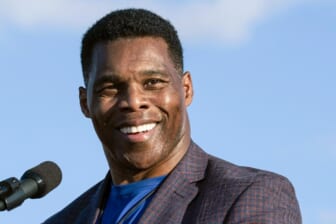 With Walker currently supported by many Perdue and Kemp voters, there is little incentive for him to make either side mad, said Randy Evans, an Atlanta lawyer and Trump’s former ambassador to Luxembourg who is backing Walker.

Evans said Walker has emerged as the “900-pound gorilla” of the primary. “The truth of the matter is Herschel is bigger than either of them put together,” Evans said.

Other Trump loyalists still believe Walker will come around to supporting Perdue, though.

“I think you’re going to have a unified Trump ticket,” said Debbie Dooley, a national tea party leader and early backer of Trump’s 2016 candidacy who lives in suburban Atlanta.

Walker has pledged to back the primary winner. Spokesperson Mallory Blount said Walker is “laser-focused on unifying the party so we can defeat Sen. Warnock.”

One likely outcome, suggests Georgia Republican political consultant, is that Walker could “finesse” the situation by appearing with Trump and Perdue at a rally without offering an explicit endorsement.

“I think Herschel can share the stage with he and David Perdue and say, ’Look, I’m not taking a formal position in the primary for governor, but what I am doing is I’m here with my friend Donald Trump, the former president, and I’m proud he’s supporting me,’” Lake said. “They can thread that needle.”

Helping Walker dodge any Trump demands is a relationship that predates their entries into politics. Walker played for the Trump-owned New Jersey Generals of the United States Football League and vacationed with Trump and his children.

“President Trump has been a great friend of mine for years. He’s a great man, got a great family, I’m going to stand behind him, but he don’t run Georgia, I run Georgia,” Walker told Newsmax on Feb. 7.

Walker has ties to Kemp, too, dating to Walker’s days at the University of Georgia.

Kemp was best friends with Daniel Dooley, the son of legendary Bulldog football coach Vince Dooley. (The Dooleys are not related to Debbie Dooley.) In a July interview with The Associated Press, Kemp remembered how he and his friend stormed the field after the game when Walker scored his first collegiate touchdown by bowling over the Tennessee’s Bill Bates in 1980.

“Daniel and I just rushed the field after the game and somehow squeezed in with the team and got in the locker room,” Kemp recalled. “So I’ve been around Herschel a lot, and I know a lot of people that know Herschel very well, and you know he’s just a great guy and he’s a damn good dawg.”