Miles Jackson, a Black man who was killed in a confrontation with police at an Ohio emergency room last year, was shot 20 times and suffered wounds to his head, chest, and abdomen, according to a coroner’s report.

Jackson, 27, died April 12 in a suburban hospital emergency room after a struggle with Columbus police officers that started when they discovered he had a gun concealed in his sweatpants. A standoff ensued after the gun went off, with police eventually opening fire as Jackson appeared to sit up and officers yelled, “He shot again!” and “He’s got a gun!”, according to bodycam footage.

The coroner listed the cause of death as a homicide — a medical determination used in cases where someone has died at someone else’s hand, but not a legal finding. It doesn’t imply criminal intent. 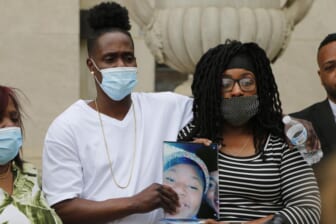 The Attorney General’s Office concluded its investigation of the shooting in August and forwarded it to the Franklin County prosecutor, who will determine whether to file charges against the officers involved. A message was left with the prosecutor’s office Thursday.

Jackson had been taken to the same hospital, Mount Carmel St. Ann’s Hospital in Westerville, earlier the day he died, but had walked away. Westerville police were then called after he was found passed out in a nearby parking lot.

After a pat-down, where an officer previously cautioned for rushing his duties missed Jackson’s gun, those officers followed medics back to the hospital, where Jackson was met by Columbus police because of city warrants for his arrest. That officer and the Columbus officers who shot Jackson were white.

Both Columbus and St. Ann’s officers fired their weapons.

Emergency room staff tried to revive Jackson but he was pronounced dead at the hospital, authorities said. No officers, hospital staff or physicians were injured.

Protests followed the shooting, one of several in recent years in Columbus that led to a reckoning in the city over racial injustice and allegations of police brutality. Those incidents include the fatal shooting of 16-year-old Ma’Khia Bryant less than a week after Jackson’s death as she swung a knife at a young woman.