Two of the white men found guilty of federal hate crimes in the murder of Ahmaud Arbery are now seeking acquittals of their convictions.

As reported by CNN, Travis McMichael and his father Gregory McMichael have filed separate motions for judgments of acquittal arguing that the killing of 25-year-old Arbery, an unarmed Black man, didn’t happen on public streets. According to court documents filed Tuesday, the McMichaels claim prosecutors failed to present sufficient evidence for their convictions.

The McMichaels, along with their neighbor William “Roddie” Bryan, were convicted of murder in November in the fatal shooting of Arbery after jurors deliberated for about 10 hours, The Associated Press reported. All three were sentenced to life in prison on Jan. 7. Federal authorities also charged them with hate crimes for targeting Arbery because he was Black. 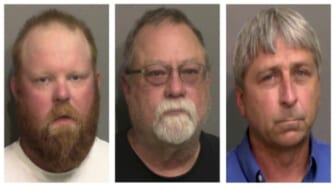 In February 2020, the McMichaels spotted Arbery running in their neighborhood outside the Georgia port city of Brunswick and concluded that he was engaging in nefarious activity. The father and son armed themselves with guns and jumped in a pickup truck to pursue Arbery. For his part, Bryan joined the pursuit in his own vehicle and recorded the seconds leading up to Arbery’s fatal shooting.

In May 2020, Bryan’s video of the tragic shooting was released and sparked a nationwide outcry. Prior to the release of the disturbing footage, the McMichaels had escaped arrest after they claimed that Arbery was shot was in self-defense.

Bryan and the McMichaels pleaded not guilty to the hate crime charges and were found guilty last month, The AP reported. Travis McMichael’s attorney noted in his 43-page appeal for an acquittal that the government did not establish that Arbery was running on a public street. Federal civil rights statutes prohibit purposeful damage or intimidation of people in public because of their race.

Gregory McMichael’s motion claims the government “failed to supply the jury with any evidence that Defendant Gregory McMichael associated African Americans with criminality,” noting that “it is true that the Government admitted evidence and testimony demonstrating that defendants Travis McMichael and William Bryan may have associated African Americans with the commission of crime,” according to the motion, per CNN.

The prosecution has not yet filed a response to the motion, according to the report.

A sentencing date has not been set for the federal hate crimes charges.

Also Read:
Arbery killers get life in prison; no parole for father, son