OPINION: Donna Brazile writes that Judge Brown Jackson's solid gold resume is superior to the resumes of most of the 115 justices who have served on the Supreme Court.

Judge Ketanji Brown Jackson is one of the most extraordinarily qualified people ever nominated to serve on the U.S. Supreme Court. That should be clear to millions of TV viewers watching her Senate Judiciary Committee confirmation hearing that begins Monday and to anyone objectively examining her record.

Jackson would make history if she becomes the first Black woman on America’s highest court since its creation in 1789. That’s certainly a plus, but she’s no token or “affirmative action hire.” Her solid gold resume is superior to the resumes of most of the 115 justices who have served on the Supreme Court.

After graduating with honors from Harvard University in 1992 and the university’s law school in 1996, where she was supervising editor of the Harvard Law Review, Jackson served as a law clerk for a U.S. district judge, for a U.S. circuit court of appeals judge, and for Supreme Court Justice Stephen Breyer, whose upcoming retirement created the vacancy she has been nominated to fill. 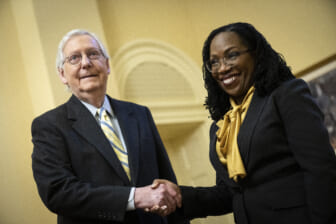 In addition to working in law firms, her other positions include an assistant special counsel and later vice-chair of the U.S. Sentencing Commission, which established a system of sentencing guidelines for federal courts. She also served as a federal public defender — a position no Supreme Court justice has ever held.

After being confirmed by the Senate as a U.S. District Court judge in Washington, D.C. in 2013, Jackson was confirmed last June to serve as a circuit judge on the U.S. Court of Appeals for the District of Columbia.

Jackson’s nearly nine years of experience as a judge exceeds that of many Supreme Court nominees, and is greater than the judicial experience of current Chief Justice John Roberts and Justices Elena Kagan, Clarence Thomas and Amy Coney Barrett combined at the time of their confirmations. In fact, over the past 233 years, 40 justices have joined the court without any judicial experience.

So it’s not just insulting but inaccurate to say Jackson’s primary qualifications for the Supreme Court are her race and gender, as some Republicans have charged.

These Republicans overlook the fact that when President Joe Biden said during the 2020 presidential campaign that he would nominate a Black woman to the Supreme Court he also said:  “The person I will nominate will be someone with extraordinary qualifications, character, experience and integrity.” Judge Jackson certainly fits that description.

Yet simply because Biden said he would right a historical wrong that has barred the door of the Supreme Court to Black female attorneys, the president’s critics jumped to the false conclusion that any Black woman Biden selected must by definition be less qualified than others. 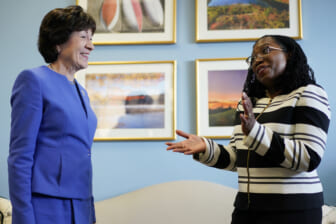 Ilya Shapiro, who was scheduled to become a senior lecturer and executive director of the Center for the Constitution at Georgetown University’s law school, tweeted in January that Biden was wrong to nominate a “lesser Black woman” to the high court — even before Biden selected Jackson. Georgetown placed him on leave after he drew criticism for the comment.

And Sen. Ted Cruz (R-Texas) said in February that Biden’s promise to nominate a Black woman was “offensive” and “actually an insult to Black women.”

Hmm … I’m a Black woman with Black female friends and relatives, and none of us were insulted by Biden’s promise or his nomination of Jackson. In fact, we’re grateful to the president and proud to see a brilliant Black woman nominated to our nation’s highest court.

Some Republicans have also absurdly attacked Jackson for her work as a federal public defender, saying that makes her soft on crime and anti-police. But Jackson’s nomination is supported by the Fraternal Order of Police (the largest law enforcement labor organization in the U.S.), dozens of the nation’s top law enforcement officials, and the National Organization of Black Law Enforcement Executives.

Law enforcement officers understand that our justice system is based on the presumption that everyone charged with a crime is presumed innocent until proven guilty and has a right to legal representation. Without public defenders, poor people and working-class people — many of them Black — couldn’t afford lawyers and many innocent people would be convicted of crimes and given unjust sentences.

The truth is that for most of our nation’s history, there was an affirmative action program to put only White Christian men on the Supreme Court. No one else was even considered for nomination. Thankfully, this ended in the 20th century with the appointment of the first Jew (Louis Brandeis in 1916), first Black man (Thurgood Marshall in 1967) and first woman (Sandra Day O’Connor in 1981).

But despite this progress, there have been 108 White men, just five women (none Black) and two Black men appointed to the Supreme Court. It’s absurd to argue that in all of American history not a single Black woman has been qualified to sit on the nation’s highest court.

Ketanji Jackson is certainly more than qualified. She would be a valuable addition to the Supreme Court, bringing the unique perspectives of a Black woman and her keen judicial mind to the court.

The Senate should confirm Jackson quickly, and on a bipartisan basis. She has earned the position and America will benefit from her presence on the Supreme Court.