It is a story as old as time. A historic Black neighborhood is at risk of being decimated by eminent domain under the guise of redevelopment.

Royal—a neighborhood just west of Wildwood in Sumter County could be cut in half if the proposed Northern Turnpike Extension plan moves forward. The route would impact properties in Royal as well as other areas of Citrus, Levy, Marion, and Sumter counties, according to WFUT. There are currently four plans under consideration, all of which would impact Royal. 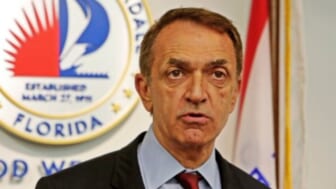 The neighborhood is one of the oldest Black neighborhoods in the state with more than 150 years of history and community. Now residents are afraid that they will not only lose their history but also lose their homes.

If the Florida Department of Transportation seizes homes connected to the project, it would be required to offer homeowners the value of their property—but residents are concerned that the money will still not be enough.

Eighty-year-old Phillip James said that he doesn’t have money to relocate and is afraid that any offer will still be lower than what residents deserve.

“They’re making a billion dollars, and they don’t give us chump change,” another Royal resident, Larry Lawson said.

Residents gathered this week at New Life Center Ministries. The report notes that most of the people there were advocating for a “no-build” option which would be against all four potential routes of the development.

A “no-build” vote by local communities does not completely remove the possibility of continuing the project. However, it is considered by the Florida Department of Transportation. Residents have been pushing for an extension of the Florida Turnpike—which is needed to lessen traffic on Interstate 75, that would not come through Royal citing, “the adverse impact on the historic African-American community.”

One of the four proposals would split one family in two. Levi, 67, and Willard, 57, live near each other on County Road 23 but if the development happens, the brothers will be separated from their 90-year-old mother, and two of their aunts, 97 and 100, who live on the other side of the road.

“There has to be another alternative,” Levi Solomon said. “You don’t break a community like ours to put in a road.”

The Wildwood community is more than 23% Black and 66% white—the construction would disproportionately affect the Black community. “From what I see, they’re trying to move the Black neighborhood out,” Lawson said. “I’m not with it.”

As previously reported by theGrio, a proposed $450 million bridge development would cut through a different historic Black community near Fort Lauderdale.

Sistrunk is Fort Lauderdale’s oldest Black community, one comprised of working families, mom-and-pop small businesses, historic churches, and landmarks. The neighborhood is amid ongoing redevelopment which would be halted if the bridge is built.