Efforts to strip names off government-owned buildings in D.C. honoring slaveowners appear to have halted before truly beginning.

As reported by The Washington Post, Mayor Muriel Bowser’s committee proposing the renaming of about 50 schools, public buildings and parks following the murder of George Floyd in 2020, has disbanded before the project was able to get off of the ground.

An anonymous member of the committee told The Post that the efforts have lost momentum since the summer of 2020 as national attention to racial injustice increased drastically following several high-profile cases of police brutality.

“It was a point in time when the city was very focused on who we’re amplifying in public space,” the committee member told the outlet anonymously, having been directed not to publicly discuss the project’s progress.

“That momentum has maybe slowed down or shifted,” the committee member continued. “There’s less pressure to rename at this point.”

The task force convened during the summer of 2020 to develop a list of facilities that they felt should change their names. The buildings honored slaveowners such as Benjamin Franklin and Francis Scott Key, as well as several lesser-known political and historical figures.

The group was supposed to produce a report outlining their reasoning for many of the name change proposals, but that will go unpublished, a spokesperson for Bowser told The Post. 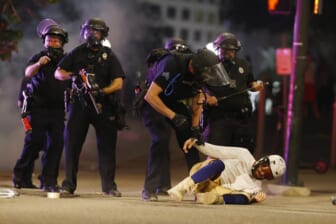 According to the outlet, Bowser’s office released a statement this week explaining that the task force originally convened with the intention of assessing buildings owned by the city’s government and recommend actions if they found that “the person the facility is named for is inconsistent with DC values, and in some way encouraged the oppression of African Americans and other communities of color, or contributed to our long history of systemic racism.”

Per the statement, “The committee has completed its recommendations, and has fulfilled its objective, but our work to advance DC values and build a more fair, equitable DC continues.”

Two buildings — Woodrow Wilson High School and West Education Campus — in the nation’s capital have been renamed since the proposal, though in both instances, advocates were long calling for those changes before the release of Bowser’s list, according to the outlet.

Per the report, thousands of buildings in D.C. still bear the names of historical figures who owned enslaved persons following the defunct project, which the city council attempted to rectify by passing a bill in December 2020 requiring Chairman Phil Mendelson to appoint a second task force of five members.

Mendelson did not complete this requirement, however, reportedly shifting focus to other topics after devising a few names of historians to potentially appoint, according to The Post.