Rap mogul Sean “Diddy” Combs was tasked with introducing Francis Ford Coppola, Robert De Niro and Al Pacino at the 94th Academy Awards in honor of the 50th anniversary of the acclaimed film, The Godfather.

The Grammy Award-winner donned a fitting accessory for the occasion: a 30-carat diamond pinky ring. According to People, the ring was designed by longtime collaborator Lorraine Schwartz.

The 52-year-old music mogul attended the event dressed in a Frère suit with a Gucci bowtie and a Zegna dress shirt. He was accompanied by his 16-year-old daughter, Chance, who was dressed in a modest white Dolce & Gabbana gown with metallic details and draping sleeves, according to People. She also wore Lorraine Schwartz jewelry.

“First of all, the biggest thing that’s going on tonight, me bringing my daughter to this, because she’s an inspiring actress, and we get to have a date, and I’m just so excited, and I’m just so stunned,” Combs told Entertainment Tonight on the red carpet.

“I’m at a loss of words, so, I’m blessed to be here. I’m presenting tonight, and we’re having a good time,” Combs added.

Per Revolt, the hip-hop culture website that he owns, Combs told the crowd Sunday, “I’m a true movie lover, and I’ve watched these films hundreds of times. Tonight, we pay tribute to an undeniable classic, The Godfather, on its 50th anniversary.” 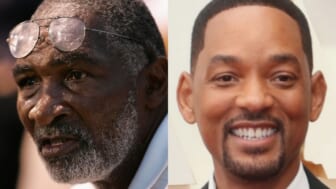 According to Page Six, he also commented on the encounter between actor Will Smith and comedian Chris Rock. “That’s not a problem. That’s over. I can confirm that.” Combs told the outlet without elaborating on how the men had reconciled. “It’s all love,” he added. “They’re brothers.”

Another source noted that Combs “said he spoke to both [Smith and Rock] separately after it happened, which has been confirmed.”