A South Philadelphia school named for a slavery-supporting president now honors a former slave who is Coppin State University's namesake.

A Philadelphia school named after a slavery-supporting president has gotten a new moniker. As reported by The Philadelphia Inquirer, the former Andrew Jackson Elementary was renamed Fanny Jackson Coppin School after the pioneering Black Philadelphia educator.

Tuesday’s celebration featured area dignitaries and an excited campus community — adults and kids who danced along to the sounds of Home, the school’s acclaimed rock band.

The school, located at 12th and Federal streets in South Philadelphia, educates 500 students from kindergarten to eighth grade.

For years, community members had considered renaming Jackson Elementary. Several prominent names were reportedly under consideration, including William Still, an abolitionist; Barbara Rose Johns, a civil rights advocate, and the late Inquirer legend and Pulitzer Prize winner Acel Moore. Decision makers chose to honor former slave Coppin, who rose among educational ranks to become the principal of the Institute for Colored Youth, the precursor to America’s first HBCU, Cheyney University, which was established in 1837.

“Our students must be given opportunities to learn in conditions and in school buildings that reflect their values and their identities,” Philadelphia School District Superintendent William R. Hite Jr. said Tuesday at the newly christened Fanny Jackson Coppin School.

Jackson was the U.S. president from 1829 to 1837 and was celebrated as a war hero. However, he was also known to be a supporter of slavery and enacted cruel, abusive policies toward Native Americans — including forcing 100,000 indigenous people to give up their land.

Coppin School Principal Kelly Espinosa told The Inquirer that its naming committee chose someone with ties to Philadelphia because “we wanted to make sure all of our kids feel seen and feel heard. We wanted the name to represent values that reflect their values and the district’s values.” 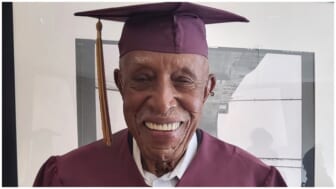 The naming ceremony came with a surprise community announcement: Anthony L. Jenkins, president of Coppin State University in Baltimore, attended the event and shared the creation of its “Philadelphia Pathway” scholarship, which offers free tuition at Coppin State to any graduate of Fanny Jackson Coppin School.

“The same tenacity that drove her is in you,” Jenkins told the students, adding that “money should never be the reason that you don’t earn a quality education.”