Abdul-Jabbar called out James recently for doing and saying things that are 'beneath him.'

Kareem Abdul-Jabbar is backtracking on statements he made recently about LeBron James.

The former Lakers star and NBA Hall of Famer took James to task on Sunday for not conducting himself better as the team’s leader and the face of the league, according to ESPN. This occurred the day that James’ teammate and friend Carmelo Anthony was to receive the NBA Social Justice Champion Award, newly designated as the Kareem Abdul-Jabbar Trophy.

“Some of the things he’s done and said are really beneath him, as far as I can see,” Abdul-Jabbar said. “Some of the great things that he’s done, he’s standing on both sides of the fence almost, you know?”

“It makes it hard for me to accept that when he’s committed himself to a different take on everything. It’s hard to figure out where he’s standing. You’ve got to check him out every time.” 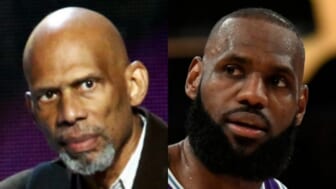 During a Monday interview on SiriusXM NBA Radio, Abdul-Jabbar clarified his statements regarding James and admitted that he missed the mark with his comments, as reported by USA Today.

“I’ve been talking to the press since high school, that’s 60 years of making statements,” said Abdul-Jabbar. “And I haven’t always gotten it right. And Sunday was one of those nights.”

Abdul-Jabbar continued, “It wasn’t my intention to criticize LeBron in any way. He has done so much for the Black community as well as for the game of basketball. 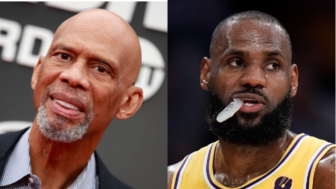 Also Read:
Kareem vs. LeBron: Much ado about nothing

“We may not always agree, but I want to wholeheartedly apologize to LeBron and make it clear to him that I have tremendous respect for him. And if he can accept that, I’ll be very happy.”

James recently surpassed Karl Malone to move into second place on the NBA’s all-time regular-season scoring list, currently sitting with 37,062 points over his 19-year career. Abdul-Jabbar is number one on that list, with 38,387 in his 20-year career.