Johnston and Deborah Price, who recently joined him, encourage other supporters to find them on their journey of retracing history.

Ken Johnston describes himself as a “walking artist,” a term defined as one who uses walking as art. There is a vast network of walking artists whose career backgrounds and interests include — but are not limited to — architecture, archaeology, anthropology, cultural geography, history, spatial design, urban design and planning.

He borrowed the name of his walking art from a June 23, 1963, event that took place in Detroit. That Walk to Freedom event was, at the time, the largest demonstration for civil rights in the U.S. and included 125,000 participants. It was during this gathering that Dr. Martin Luther King Jr. first gave the speech that later became known as “I Have a Dream,” the beloved address that made its national debut two months later at the March on Washington for Jobs and Freedom.

“In choosing the title Walk to Freedom it represents the length and breadth of a people seeking equality from violence and oppression,” Johnston writes on his website, OurWalkToFreedom.com. “It is also the intimate relationship with the land that we walk upon. And it represents our flight from the hell on earth created by our oppressors.”

Johnston, 60, has walked thousands of miles in the name of Black history. According to The Philadelphia Inquirer, he did the first walk in 2017 just for his own personal health. But the next year, he embarked on an ambitious 400-mile solo walk to commemorate the 50th anniversary of the assassination of Dr. King.

A year later, he walked 71 miles in Ireland in commemoration of the 1969 People’s Democracy March. 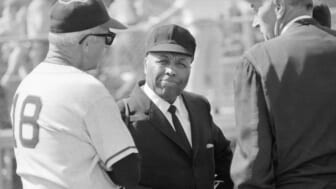 Most recently, Johnston and a supporter, Deborah Price, embarked on a 165-mile journey that traces a path that Harriet Tubman took from Cape May to Burlington, N.J. The Harriet Tubman Museum in Cape May says there is “evidence that she was working here in 1852 as a domestic worker and cook for families and hotels.”

“One of the walk’s goals is to resurrect the voices and memory of the people who history has forgotten in this coastal area, including Harriet Tubman,” Johnston said in an exclusive interview with theGrio. “Her work on the Eastern side of the Delaware River was vital to the regional mission of the Underground Railroad.”

“While there’s little physical evidence of her leading rescues in South New Jersey, there’s oral evidence to explore of her crossing the Delaware River by boat and standing on a remote river landing in the Town of Greenwich to receive Freedom Seekers,” he continued. “Additionally, we know she worked in Cape May hotels and would have absolutely come in contact with the key agents here who operated the Underground Railroad and were affiliated with the local African Methodist Episcopal Churches.”

Price was working as a volunteer at the Harriet Tubman Museum when Johnston visited. “Intrigued with his ‘History of Walks,'” she told TheGrio, “I became further drawn to the purpose of this particular ‘walk,’ as I have a vast interest in researching historical events and people. Ken was gracious to extend an invitation to join in on the journey.” 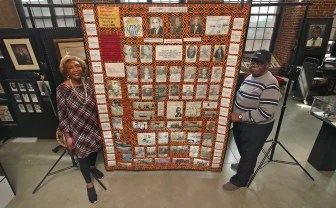 Johnston and Price encourage other supporters to find them on their journey, and the duo’s schedule is being shared on OurWalkToFreedom.com. They note that inclement weather, illness, or injury could affect their plans, but what’s currently set runs through May 15.

In an original written art piece Price shared with TheGrio, she expressed “Why WE Walk:”