In the magazine's May 2022 issue, cover star Rihanna discusses her belly-baring style, life with A$AP Rocky, and her long-awaited new music.

To date, Rihanna’s first pregnancy has been full of memorable fashion moments. But as Black Maternal Health Week launched, the multi-hyphenate megastar made her most iconic maternity fashion statement yet, covering the May 2022 issue of Vogue magazine.

In addition to continuing to celebrate her growing baby bump in an enviable assortment of non-maternity luxury looks, the new member of Forbes’ billionaire list also revealed more about the pregnancy itself, giving fans insight into what this seismic shift in her life has been like thus far.

“As much as it’s happening, it’s also not happening. Sometimes I’ll walk past my reflection and be like, ‘Oh sh—!‘” Rihanna tells Chioma Nnadi, editor of Vogue.com. “At first I expected some magical change, but really I remain who I am…none of the dials are turned down. I think I even say yes to more now because I know it will be different on the other side of this.”

What changes is she expecting?

“Balance is one of my biggest challenges and always has been,” she explains. “And now there’s another human being coming into play, it changes what that means again. Still, I have businesses that aren’t going to run themselves. My mom handled the three of us with not even close to the amount of resources that I have, so I can absolutely do it. What it looks like? I’m not sure.”

As Rihanna further shares, she and partner A$AP Rocky approached conception with a similar openness, telling Nnadi they weren’t strategically family-planning but were “certainly not planning against it,” adding: “We just had fun.”

Following Rihanna’s journey dressing her pregnancy has also been fun, as she’s refused to adhere to a traditional maternity wardrobe. “When I found out I was pregnant, I thought to myself, There’s no way I’m going to go shopping in no maternity aisle. I’m sorry—it’s too much fun to get dressed up. I’m not going to let that part disappear because my body is changing.”

While noting her body has sometimes changed “from hour to hour” over the past several months, the result has been a series of belly-accentuating looks one could as easily envision Rihanna wearing if she weren’t in her third trimester.

Memorably, that includes the epic sheer black Dior babydoll dress she wore to the label’s Paris Fashion Week presentation—which she ironically considers “the closest thing to maternity clothes that I’ve worn so far.” 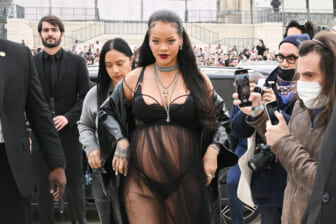 In case you’re wondering, yes, the dress originally had a lining. But Rih and longtime stylist Jahleel Weaver, who also co-fashion edited her Vogue spread, chose to remove it, leaving her belly jewelry and Savage X Fenty g-string visible. “Listen…they were going to see my panties regardless. So they’d better be mine,” she quipped.

Nevertheless, she hopes others have taken note. “I’m hoping that we were able to redefine what’s considered ‘decent’ for pregnant women,” she tells Nnadi. “My body is doing incredible things right now, and I’m not going to be ashamed of that. This time should feel celebratory. Because why should you be hiding your pregnancy?”

What she and A$AP Rocky have kept hidden, however, is their baby’s gender, though there has been heavy speculation. “When we’re ready to tell the world, we’ll just tell them,” Rihanna shares. Likewise for sharing any definitive plans for their future as a couple. “I just feel like I can do any part of life by his side,” she says.

And yes, music is still a part of that life, though whatever plans Rih had for that long-awaited ninth album have understandably shifted amid recent developments.

“I’m looking at my next project completely differently from the way I had wanted to put it out before. I think this way suits me better, a lot better,” she says. “It’s authentic, it’ll be fun for me, and it takes a lot of the pressure off.”

For the immediate future, she’s looking forward to meeting her first child. “They’re going to teach me more than I could ever teach them,” she says. “I want to see who they are in the world, who they become. Because I’m just here to keep them on the rails—a passenger as much as the driver.”