Gary Chambers says he supports progressive policies like the Green New Deal, Medicare for All, and a minimum federal wage of $15 an hour.

Activist Gary Chambers told NBC News that his campaign to become the first Black senator from Louisiana is a “very winnable race.”

Chambers, 36, went viral in January with his first ad, in which he wears a blue suit and smokes a blunt. The ad, called “37 Seconds,” highlights the high rates of arrests and prosecutions in marijuana cases in the state. The ad has garnered 6 million views.

According to an analysis by NOLA.com, 86% of arrests and summonses in Louisiana are of Black people, who make up 60% of the population.

“When I look at this state and its people, we are so much greater than our state’s ranking,” Chambers said. “And it’s in part because of the leaders that we’ve had who make decisions that are against the people of this state.”

In another ad, called “Scars and Bars,” Chambers burns the Confederate flag. He told NBC News last month, “We need to burn the remnants of the Confederacy from every piece of legislation that exists in this country in order for this country to be whole again.”

In the ad, Chambers says, “They said, ‘We hold these truths to be self-evident, that all men are created equal.’ But here in Louisiana and all over the South, Jim Crow never really left. And the remnants of the confederacy remain.”

He told NBC News, “we need to build that conversation by talking about the racial inequities that exist.” 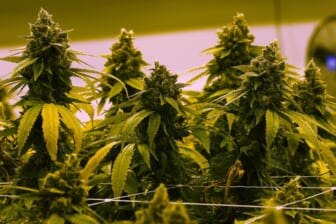 Chambers said that he supports progressive policies such as the Green New Deal, Medicare for All, and a federal minimum wage of $15 an hour.

He is running to replace Republican Sen. John Kennedy, who has raised $23 million to Chambers’ $1.2 million. However, he remains optimistic. “If the DNC and … state party take this race seriously … we can raise the resources and build the infrastructure to win this election.”

Chambers has been described as a counterculture candidate who resonates with the public. Experts note that his challenge will be to build motivation and trust among voters.

“We certainly appreciate somebody who is getting out front, making a lot of noise about this issue, and not just doing it in a provocative way, but also explaining the many different criminal injustices,” Peter Robins-Brown, the executive director of Louisiana Progress, told NBC News. But one drawback of the reaction to the video, Robins-Brown said, was that many viewers “got caught up on what he was doing and they didn’t listen to what he was saying.”

“There’s a general appreciation … for people who are running for office or in office who can speak kind of an unvarnished truth,” Robins-Brown added. “He believes what he’s saying. So it’s not just a grand piece of showmanship.”