The family of Steven Taylor filed a federal lawsuit against Jason Fletcher in the San Leandro, California, case.

Jason Fletcher, a former police officer in San Leandro, California, has been sued by the family of the man he shot inside a Walmart two years ago. The family is seeking damages in excess of $10 million.

Fletcher is facing manslaughter charges for fatally shooting 33-year-old Steven Taylor in April 2020 after responding to calls that the man was “wielding” a baseball bat and being hostile to people, according to the East Bay Times.

The multimillion-dollar federal lawsuit filed by Taylor’s grandmother and two children also names Officer Stefan Overton, who entered the store after Fletcher and used a Taser, and the City of San Leandro.

In a report from the Mercury News last summer, Superior Court Judge Don C. Clay said at a preliminary hearing that he found sufficient evidence for Fletcher to stand trial for manslaughter but said in court that he could not foresee a clear verdict. “If this is just it right now in front of a jury, there’s no way in the world,” he said. He added that he could not “under any circumstances” see “12 people saying the evidence here is sufficient to support a guilty verdict” — or an acquittal.

“I just don’t see it. Twelve people aren’t going to agree to that,” he said.

An independent report released just months after the shooting found that Fletcher should have called for backup and tried de-escalation techniques on Taylor. Instead, he used a Taser on Taylor three times and then shot him once in the chest. 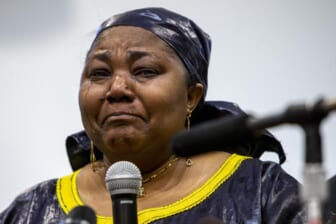 The report said that police were called to Walmart because Taylor appeared to be shoplifting. He grabbed an aluminum bat when security confronted him. One security guard, Michael Malone, testified at the preliminary hearing that he warned Taylor after police were called, saying, “I told him the situation, you know, how things are going with Black men and police.” He reportedly said, “They’re about to kill you.” Taylor’s response, according to Malone, was, ‘I don’t care, I’ll wait for police to get here.’”

The East Bay Times said the report noted that by “rushing” into the store, Fletcher “limited his tactical options, elevated the risk of conflict, decreased the possibility of a safe resolution, and assured that Overton would enter the store with a deficit of knowledge as to what was transpiring.”

San Leandro Mayor Pauline Russo Cutter said that the city will defend the lawsuit, but that the city has “learned from” Taylor’s tragic death.

This is the third time federal lawsuits have been filed against Fletcher. In one he was accused of shooting a couple’s dog; the shooting was ruled justified. The second suit centered on Fletcher and another officer beating a man during an arrest. That case was settled out of court.

Fletcher resigned from the police force in 2021.