A joint letter released Wednesday states: “That [Amy] Wax has been permitted to teach, supervise, and ridicule minority law students for over twenty-one years is alarming.”

Backlash at the University of Pennsylvania against racist remarks by law professor Amy Wax continues as students released a letter condemning Wax’s rhetoric and calling for her to be suspended.

“That Wax has been permitted to teach, supervise, and ridicule minority law students for over twenty one years is alarming,” the letter said. “Few understand how much more burdensome law school is for students who continuously receive the message that they are ‘less than’ or do not belong.”

As previously reported by theGrio, Wax, who has a history of racist and xenophobic remarks, appeared on Tucker Carlson Today, which airs on Fox Nation. She said of South Asian Americans, “They climb the ladder, they get the best education, we give them every opportunity, and they turn around and lead the charge on ‘we’re racist, we’re an awful country.’ On some level, their country is a s–thole.”

Earlier this year, Wax said that the U.S. would be “better off with fewer Asians and less Asian immigration.” 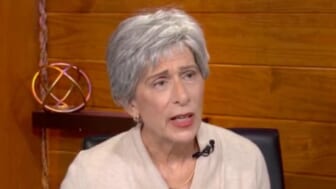 Wax, 69, reportedly is in the midst of disciplinary proceedings at Penn. “The University of Pennsylvania Carey Law School has previously made clear that Professor Wax’s views do not reflect our values or practices,” a representative told NBC News. “In January 2022, Dean [Theodore] Ruger announced that he would move forward with a University Faculty Senate process to address Professor Wax’s escalating conduct, and that process is underway.”

However, the latest NBC News report notes that Wax is currently teaching two courses at the law school.

“It’s a bit scary thinking about the impact that she’s had teaching at Penn for so long,” Dillon Yang, president of the National Asian Pacific American Law Student Association and a second-year law student at Notre Dame University, told NBC Asian America.

“Professors are supposed to teach the law in a neutral way, in ways that law students can form their own thoughts about the law. But clearly, she doesn’t hide what she truly feels about the different minority groups in America. It’s hard for me to believe that it wouldn’t shine through in a classroom setting,” Yang added.